‘Bato’ on fight vs drugs: Many have already died, do we stop now? 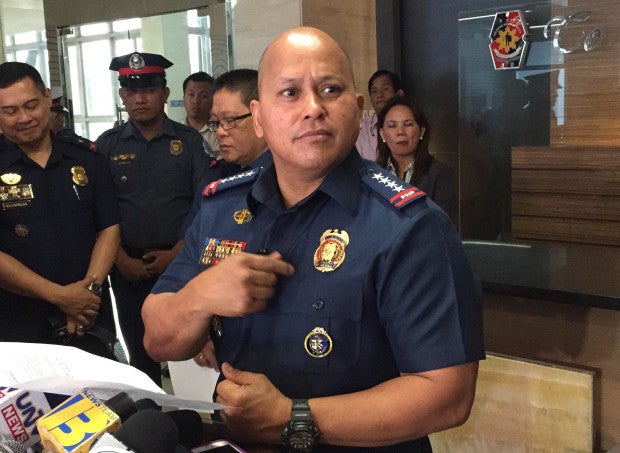 The chief of the Philippine National Police (PNP) decried the “legal harassment” faced by the police force following the deaths of hundreds of suspected drug users and pushers in its anti-illegal drugs operations.

(The police have the support of the Duterte administration even now that we are in danger with legal harassment and counter-charges because of our intensified campaign against drugs, crime, and corruption. Don’t you feel a boost of morale now that everyone is helping us? Everyone wants us, the PNP, to succeed in our campaign against drugs and crime.)

In a press briefing, Dela Rosa gave his word of assurance to policemen who are upright and are just doing their jobs.

(I want to tell you all that if you are a police who is doing his job properly, you won’t be neglected.)

He also rallied his men to continue on with its fight against drugs, as many drug suspects have already surrendered and died.

(Onward! The momentum is on our side; we cannot afford to waste this momentum. There have been so many, thousands, that have surrendered. Many have died, do we stop now?)

The PNP chief issued these pronouncements after Senator Leila de Lima said that she intends to launch an investigation into the killings of drug suspects.

De Lima, who is set to become the chair of the Senate committees on justice and human rights, said that her inquiry seeks to come up with operational guidelines for law enforcement agencies.

In the same press briefing, Solicitor General Jose Calida said that his office will be the PNP’s first line of defense and added that PNP personnel can snub any Senate or congressional inquiry on the rising body count of drug suspects.

“I am here to encourage the PNP not to be afraid of any congressional or senate investigations. We will defend them. If there is a ‘fiscalizer,’ I am the neutralizer and the defender of the PNP. So huwag kayo matakot, mga pulis and other operatives. Marami na po tayong batas (So don’t be afraid, police and other operatives. We have many laws). There is no need for investigation in aid of legislation kuno,” Calida said. JE