Vigilante killings force 7,000 to give up | Inquirer News

Vigilante killings force 7,000 to give up 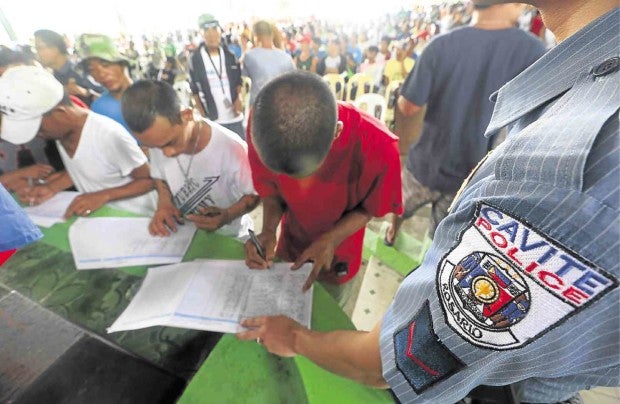 MASS SURRENDER At least 1,000 confessed drug dependents surrender to police at the town hall of Rosario in Cavite province amid the government’s intensified drive against illegal drugs. MARIANNE BERMUDEZ

CITY OF SAN FERNANDO—The killings of suspected drug dealers and users, supposedly by vigilantes, have given the “impression that it is better to surrender than die,” said a top police official in Central Luzon region, where some 7,000 confessed drug offenders have yielded to authorities since July 1.

Aquino said 45 drug users and pushers were killed from July 1 to 7 when they fought policemen conducting buy-bust operations or serving arrest and search warrants. He said 20 suspects were killed during police operations conducted from from June 1 to 30.

“We are open to an investigation [for the spate of extrajudicial killings],” he said.

But fear had led offenders to submit to the authorities, Aquino said, adding that many of them had promised to leave the drug habit and trade.

On Sunday in Nueva Ecija province, 2,500 confessed drug dealers and users in Cabanatuan City pledged to change their lives.

Supt. Joselito Villarosa Jr., city police chief, said they surrendered on account of a “knock and persuade” operation launched by the police.

He said police and village officials went on house-to-house campaign to encourage suspects to give up their ties with illegal drug syndicates.

Community members from villages, schools and civil society groups would be tasked to monitor on the activities of those who surrendered, Villarosa said.

“Those who are not surrendering are prepared to slug it out with us,” Aquino said, adding that the Central Luzon police would continue to pursue operations “until the [drug] menace is defeated.”

In Pangasinan province, police have arrested 109 suspected drug dealers and users and seized 66.01 grams of shabu worth P429,091 during raids since July 1. A total of 191 confessed drug users have surrendered.

In Zambales province, buy-bust operations in Olongapo City led to the surrender of 18 drug offenders, after three suspected drug pushers were killed in a shootout with police in nearby Subic town on Saturday.

“Many were frightened by what happened in Subic town. We’re expecting more [drug suspects to surrender] in the coming days,” said Insp. Vivianne Reyes, deputy station commander in Olongapo.

Also on Saturday, the bodies of three men were found on a road in Cabanatuan City. Police said the men were shot in the head and their mouths were covered with packaging tape. Police believed the men were killed elsewhere and dumped in that city.

On Saturday, Nelson Enriquez was killed in a shootout with the police during a buy-bust operation in Barangay Moras de la Paz in Sto. Tomas town in Pampanga. His suspected accomplice, Jacky Castro, was arrested.

In Quezon province, Rodrigo Polintan Jr., 40, was shot and killed by two men outside his house in Barangay 1 in Lucena City at 1:30 a.m. on Sunday, police said.

Mary Grace Oracion, 22, Polintan’s live-in partner, said the suspects barged into their house and dragged Polintan out. He was shot in the head.

PO3 Jefferson Tamaray, case investigator, said police found a death threat among messages in Polintan’s mobile phone, with the unidentified sender accusing him of working for the police.

Oracion denied that Polintan was still engaged in selling illegal drugs. “As a matter of fact, he told me that he is now a police asset (informant),” she said.

In Batangas province, a suspected drug pusher died after a shootout with policemen following a drug buy-bust in Barangay Anilao in Lipa City on Saturday night.