Duterte promises to fix insurgency, war in Mindanao before his term ends 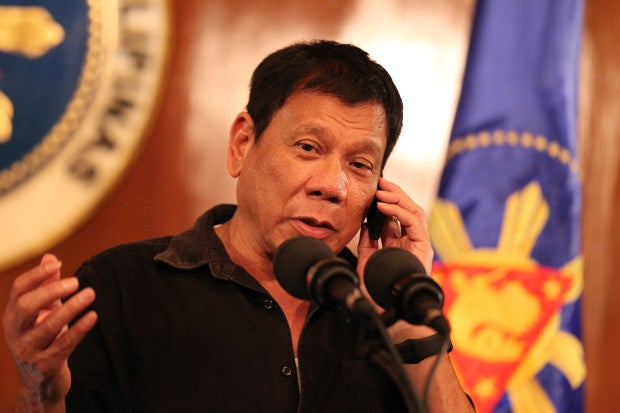 DAVAO CITY—President Rodrigo Duterte assured Muslims that by the end of his term, he would be able to address war and insurgency in Mindanao.

Speaking before the Muslim community during the Hariraya Eid’l Fitr celebration in a convention center here, Duterte said: “With the grace of Allah, I might be able to do this within six years. It will not come overnight. Certainly, it will not come next year.”

“Probably, it will be something about two to three years from now. But I assure you that something will change before I end my term,” Duterte said, drawing applause from the crowd.

“I foresee that towards the end of the year, we’d be able to come up with the framework—kung paano gawin ang federalism. But, if the Filipino nation and a plebiscite would not want it, then I am ready to concede whatever is there in the BBL law,” he said.

Duterte reiterated that he is ready to negotiate with the MNLF and personally talk with its leader Nur Misuari, who has been in hiding after he was charged for the Zamboanga City siege in 2013.

The President also assured them that he will keep his promise to bring peace in Mindanao.

“A promise is a promise.  My word of honor is something which I value very much. Kaya ako pag nag-bitaw ng salita ‘yun na ‘yun at hindi ko na pinapalitan (For me, if I give my word, that’s it. I won’t make any changes [in my promise]),” he said.

“Let us build a nation that will be founded on peace and understanding,” Duterte added. TVJ