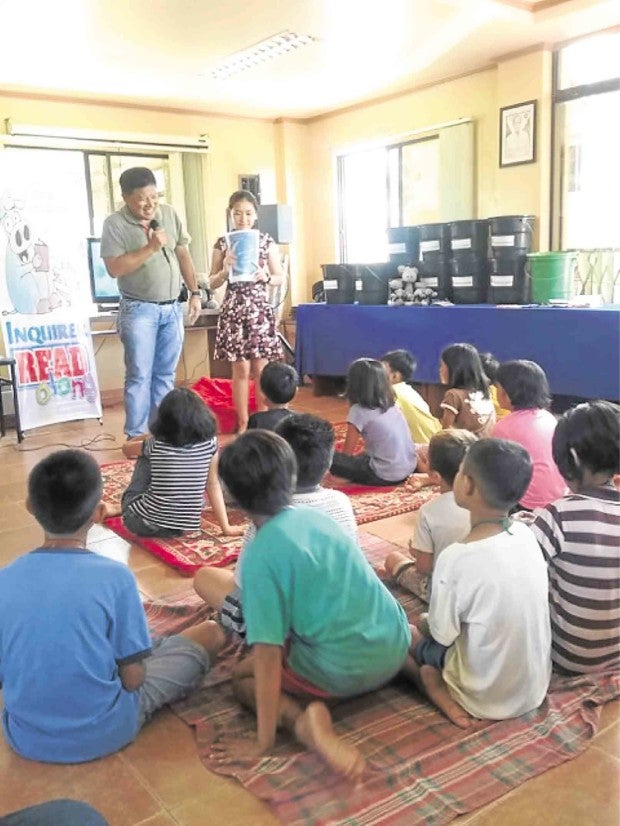 MINGLANILLA Mayor Elanito Peña and daughter, Angel, read Eric Carle’s “Papa Please Get the Moon for Me” to 25 children during a read-along session with Inquirer in Barangay Ward 3, Minglanilla, Cebu on Father’s Day. CHRIS EVERT LATO

JUSTINE Matbagon was nervous after he finished his work. It was the first time for the 10-year-old to make a card for his father, Melvin.

“I don’t know how he will react. I don’t want him to cry. I think he will kiss me again and again because he will be happy,” said Matbagon, a Grade 5 pupil of Minglanilla Central School in Minglanilla town, 17 kilometers south of Cebu City.

He said his father, who drives a delivery truck, was a hardworking man who “never forgets to kiss and hug us when he leaves for work.”

The boy was among 25 children who made colorful popsicle cards for their fathers, drawing their faces on the front and writing messages on the back. The activity was part of an Inquirer Read-Along session at Barangay Ward 3 in Minglanilla to celebrate Father’s Day on June 19.

Mayor Elanito Peña and daughter Angel read Eric Carle’s “Papa Please Get the Moon for Me,” a story of how a father reached the moon to give it to his daughter Monica who wanted to play with it. Angel, a Grade 11 student at Paref Southcrest School in Cebu City, read the story in English while the mayor translated the story in Cebuano.
“A good father will always work hard to give you what you need. Your fathers love you. They are happy when you are happy,” Peña told the young listeners.

Glen Oberes, a barangay councilor who has 9-year-old twins named Alyssa and Lance, said that “as a father, you have the responsibility to make sure that your children grow up to be kind and loving people. That is not easy. It is overwhelming.”
The twins were born prematurely at 34 weeks in July 2006. Oberes was shocked when he found out that his wife, Aubrey, was carrying them in seven months of pregnancy.

“Raising a child is a huge challenge … what more if you have two at the same time? I was a first time father and suddenly there were two,” he said.

Asked about the lessons he learned from his father, 10-year-old Heaven Paño said he taught her that “as the oldest child, I should take care of my two younger siblings, Hayessa and Harabelle. I should set good examples because my sisters look up to me.”

Leif Anthony Villaraza, 10, said his father Riche, a jeepney conductor, taught him the importance of working hard because money is not easy to find.

For Oberes, being a father to twins is his life’s greatest challenge.

“I am spending a lot of time with my children because they grow up very fast. Yesterday, I was just changing their diapers and now they are almost nine years old,” he said.

“I always hug them and tell them that I love them because in the blink of an eye, they will be adults and I won’t be at the center of their universe,” he added.