‘Butchoy’ bears down on Taiwan 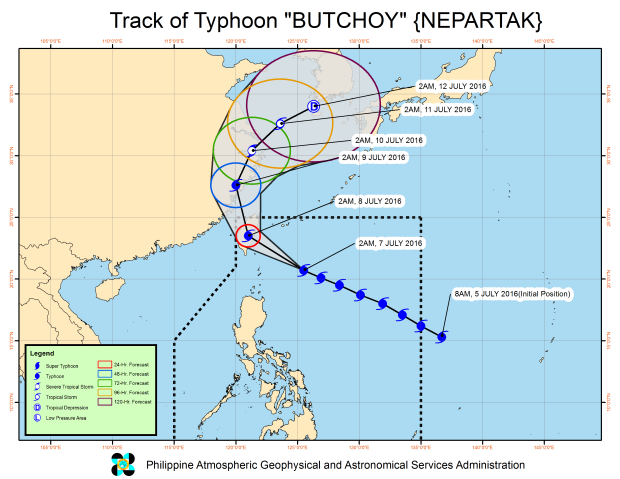 JUST a hairline away from being classified as a supertyphoon, a slower “Butchoy” crept toward Taiwan on Thursday although it continued to influence the southwest monsoon prevailing over the country, spawning rains over large parts of Luzon, the weather bureau said.

Some domestic flights have been canceled in the region.

At its peak, the typhoon known internationally as “Nepartak”—a Micronesian word for a local warrior—packed sustained winds of 220 kilometers per hour, only 1 kph away from reaching the highest level of the storm warning system of the Philippine Atmospheric, Geophysical and Astronomical Services Administration (Pagasa).

Its gusty winds, on the other hand, clocked in at 255 kph.

Per Pagasa’s new storm classification system, a weather system is considered a “supertyphoon” when its sustained wind speeds reach more than 220 kph, while it is only a typhoon when its strength ranges from 118 to 220 kph.

Butchoy, however, was good enough to merit maximum category under the classification system of the Hawaii-based Joint Typhoon Warning Center, which measures wind strengths in one-minute intervals.

Pagasa does its measurements in 10-minute intervals.

But by 4 p.m., the strength of Butchoy’s sustained winds went down to 205 kph and gusts of 240 kph, according to the Pagasa weather bulletin.

Its eye was located at 160 km northeast of Itbayat, Batanes, moving west northwest at 17 kph.

Pagasa raised Signal No. 2 over Batanes group of islands. Signal No. 1 was hoisted over the Babuyan islands with 30-60 kph winds within 36 hours. With a report from AP