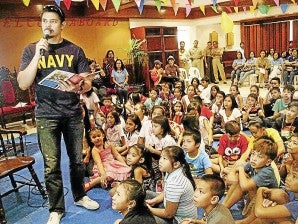 THE READER Actor Dingdong Dantes reads to poor children and children of Philippine Navy personnel at the Navy headquarters on Roxas Boulevard. It was a simultaneous Read-Along with 8 other naval bases in the country, one of the Navy’s activities to mark its 113th year ARNOLD ALMACEN

MANILA, Philippines—Loud shrieks and applause from hundreds of children and adults from all over the country greeted the actor and Navy reservist Dingdong Dantes as he arrived for a special Inquirer Read-Along session at the Philippine Navy Headquarters on Roxas Boulevard yesterday.

The Saturday session was a simultaneous read-along, greatly facilitated by the Navy’s video teleconferencing system (VTS), so that some 300 children from eight other naval bases around the country were able to join the readings which were mainly conducted in Manila.

Unknown to many, Dantes holds a major sergeant rank as a Navy reservist.

“My grandfather used to be with the Philippine Constabulary. My family has maintained a close relationship with the Navy. So when some of my friends urged me to be a reservist in 2006, I did not hesitate,” he said. He said he also joins Navy activities like medical missions whenever his schedule permits.

“I was actually amazed how I was able to read to kids from different naval stations across the country. It was very interactive,” said the actor who seemed comfortable and at ease even if he was swarmed by star-struck kids.

Allyssa Noveen Sustigmers, 11, a participant from Zamboanga City, said she was especially moved by Dantes’ reading of “Lost at Sea” by Raechelle Castellon, a story about a girl who is reunited with her father, a seafarer whom she thought had been “lost at sea”.

“My father is in the Navy. He is always away, always at sea,” Allyssa said.

Castellon’s story, which is part of the Gig Seafarer Children’s Stories series published by Gig and the Amazing Sampaguita Foundation, seemed to have a special resonance with the participating children.

“Some shed tears while they were listening to Dantes’ reading,” said Commodore Armando Guzman, the Naval Forces Western Mindanao commander. It could be that they were able to relate to the story because the main character had a similar job to their parents, he said.

Eleven-year-old Irish Roxas said she became appreciative of her father’s kindness and sacrifices from listening to Dantes.

“I learned to give value to my parents’ hard work, just like the girl in the story,” said Roxas, who joined the session in Cavite City.

According to Vice Admiral Alexander P. Pama, Flag Officer in Command of the Philippine Navy, the Navy uses the video teleconferencing technology almost daily for meetings with staff and commanders from other naval forces, precluding the need to travel for conferences.

“We thought, since the technology is already there, we might as well use it for other worthwhile activities, such as reading sessions like this,” he said.

The video feed of the session in Manila was transmitted via the Navy’s VTS to eight other naval stations, where children had been gathered for the readings.

Joining the readers was Navy 1st Lt. Marie Angelica Sisican of the Office of the Chief of Naval Staff, who opened the session with “Si Pilandok sa Kaharian sa Dagat” by Victoria Añonuevo, a story about how Pilandok outsmarted the greedy Datu Usman by luring him with the riches of the sea.

Alitaptap storytellers Rich Rodriguez and Percy Gapas capped the session with a lively tandem reading of “Hipon and Biya” by Carla M. Pacis, which tells how two different sea creatures learn how much they need each other. Both stories were published by Adarna House.

With Navy cameras filming the Manila session, the readers were able to interact with the children in the various naval bases during the question and answer portions that followed each reading.

For the more than 100 children, mostly Aeta and children of Navy personnel, who joined the session in Zambales, the highlight of the event was when Dantes threw a question at a participant in San Antonio.

When Hazel Dumulot, a 13-year-old Aeta girl, answered Dantes’ question correctly, the children gathered at the main classroom of the Naval Education and Training Command (NETC) erupted in cheers and applause.

“We enjoyed watching the story read by Dingdong Dantes and answering his questions,” said Jason Zafra, 7, an orphan under the care of the Children’s Joy Foundation, in Puerto Princesa.

Dantes considers education as his personal advocacy. “I really believe in the power of knowledge, that’s why whenever I can, I get involved in activities like this,” he said.

“I tell kids that knowing is half the battle, so reading is really important,” he said.

First-time reader Sisican said the session was a “learning experience.”

“Our events are usually with adults. Children are really different as an audience. You have to always have ideas on how to keep them entertained,” she said.

Most of the children who attended the sessions were first-timers as well. For 10-year-old Dianne Ociel in Manila, the most memorable lesson she learned was from “Lost at Sea”.

“A family should stay together, through the good times and the bad,” she said.

In Davao City, children with the Padre Pio Home for Children, a religious nongovernment organization that provides temporary shelter for abandoned, orphaned and neglected children, attended the session. Kris, 12, said the experience has inspired her to strive more to learn “and encourage other children like me to love the art of reading and the learning that one derives from it.”

Lieutenant Colonel Omar Tonsay, director of the Naval Public Affairs Office, said one of the goals of the sessions was to facilitate the interaction of dependents of Navy personnel and underprivileged children.

The participants in all the venues were a mix of Navy dependents and underprivileged kids invited in coordination with the Department of Social Welfare and Development (DSWD) and local government units.

In La Union, the 35 participants gathered at the Poro Point naval station who followed the stories through visuals projected on the wall, said they enjoyed the stories, especially the one read by Dantes, because it had a “happy ending.”

In Southern Luzon, the facilities used only by the naval top brass and off limits to civilians, were transformed into children’s corners, complete with buntings and balloons.

“I wish we can do more of these forms of community service,” said Mercado.

Lieutenant Darwin Nieva, director of the Public Affairs Office of the Naval Forces of Southern Luzon based in Rawis, Legazpi City, said the Read-Along was a better idea than the free circumcision that the Navy usually provides as a form of community service during the summer months. “It encourages learning,” Nieva said.

The Sangley Point, Cavite City, session drew some 30 children, mostly kids of Navy personnel and those from the poor communities surrounding the naval camp.