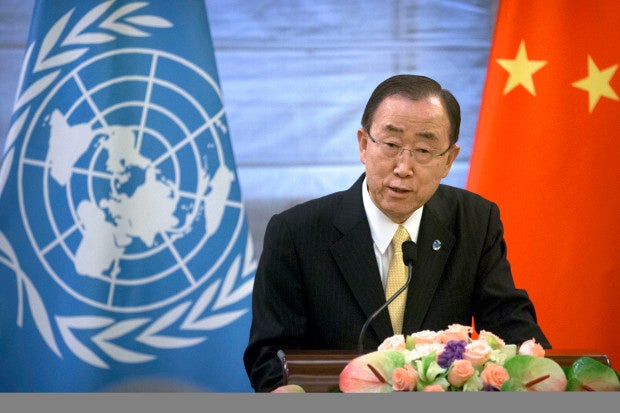 BEIJING—UN secretary general Ban Ki-moon told China’s leaders on Thursday that a flourishing civil society and free media are key to China’s development on one of his last visits to Beijing as UN leader.

Ban also said he stressed to Foreign Minister Wang Yi that all countries with rival claims to the South China Sea should settle their differences peacefully, ahead of a ruling by an international panel on the validity of China’s claims to virtually all of the sea.

Wang told a joint news conference with Ban that the Chinese government also wants a “peaceful resolution,” but the arbitration ruling would “only escalate the disputes and tensions.”

Ban brought up the subject of civil society and an independent media as Wang, who last month berated a Canadian journalist for asking a question about China’s human rights record during a news conference in Canada, looked down at his lectern or stared stonily ahead.

“As China continues along the path of transformation and reform, I encourage China’s leaders to create the space needed for the civil society to play its crucial role,” Ban said. He added that environmental activists, human rights lawyers and defenders and others “can act as a catalyst for social progress and economic goals.”

“They can represent the diverse interests of the population and bring the voices of the vulnerable from the margins. Along with a free and independent media they can help ensure accountability, thereby helping the state to evolve better and strengthening its standing in the eyes of the people,” Ban said.

This week marks the first anniversary of a crackdown in China on human rights lawyers and activists in which more than 200 were detained or questioned. One year on, around two dozen are still detained, including several who could face life imprisonment after being charged with subverting state power.

Ban, whose second term as UN secretary-general runs out at the end of the year, said, “The world will look to China to complement its remarkable economic progress by giving citizens a full say and a role in the political life of their country.”

Read Next
Tiangco: ‘No work, no pay’ policy not demeaning, absenteeism is
EDITORS' PICK
COVID-19 has infected more than 69,000 people globally
Xi’s early involvement in virus outbreak raises questions
The Najima Drive: Nissan’s MD drives #GoAnywhere adventures in new video series
Can Your Brand of Meat Be Trusted? Here’s How to Know You’re Eating Safe Meat
COVID-19 screening checkpoints remain for those going to Boracay
Can travel make you fall in love?
MOST READ
2,000 iPhones given for free by Japanese gov’t to passengers stuck on ship due to coronavirus
WATCH: Sarah Geronimo dances ‘fierce’ version of ‘Tala’
Xi’s early involvement in virus outbreak raises questions
James Deakin visits injured student rammed by jeepney in Makati
Don't miss out on the latest news and information.