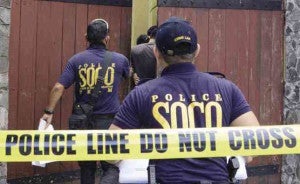 TAGBILARAN CITY, Bohol—A suspected drug lord was shot dead on Thursday morning after dropping off his wife and daughter at school in Barangay TipTip here.

Sherwin Lofranco Bautista, 43, died of bullet wounds in the head and chest after one of the two men on board a motorcycle fired at him at the corner of Tiptip Elementary School in front of the barangay hall.

The teachers and pupils were on the school grounds for the flag raising ceremony when Bautista was ambushed at about 7 a.m.on Thursday.

They were about to sing the national anthem when the bursts of gunfire rang out, prompting them to scamper in different directions.

Fermilianom Epe, village watchman and security guard of TipTip Elementary School, said he saw Bautista bring his wife and daughter to school on board his motorcycle.

After dropping them off, Bautista drove away but was chased by two men also on board a motorcycle.

The backrider fired at Bautista who was hit. He got off his motorcycle and was able to run about 10 meters but the gunman approached him and repeatedly shot him in the head and chest.

The gunman went back to the motorcycle with his companion and drove off.

“He was a level one drug lord in the province,” said Vale.

In 2011 and 2014, Bautista was arrested by authorities for illegal drug trade but cases against him were dismissed by the court.  SFM