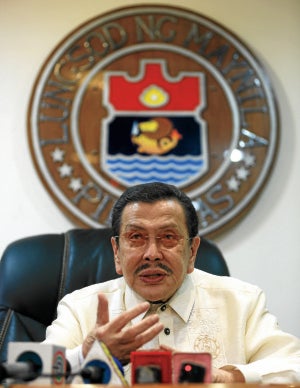 MANILA — Manila Mayor Joseph Estrada wants the policeman who threatened to kill him and went amuck in the Manila Police District headquarters last Sunday, removed from the service.

He said this even as he clarified that he had no grudge against PO1 Vincent Paul Solares.

“He should be removed,” Estrada said in a statement.

He said while he did not know Solares, based on reports he received, the policeman who was assigned at the Police Community Precinct 11 and has been in the service for “barely” two years, “may have a psychiatric problem.”

Solares was “too drunk” at the time he went amuck and had “family problems,” Estrada said.

“People who are mentally ill, who have a mental disorder (siraulo, may mental disorder), they should be dismissed…(Solares) is out of his mind,” the mayor said, noting that the policeman should “not be taken seriously.”

Coronel said they would review the local police force’s screening process to weed out those unfit for the job.

“We have to be more vigilant and more careful in screening applicants so we have to review again the procedures used in the selection,” Coronel said.

Solares has been charged with illegal discharge of a firearm, and alarm and scandal after his rampage at the MPD headquarters.

He was also charged with physical injuries and grave threats after he was seen pointing a gun at and hurting a Manila traffic enforcer in closed-circuit television camera footage.

This reportedly took place minutes before he went to the police headquarters.  SFM