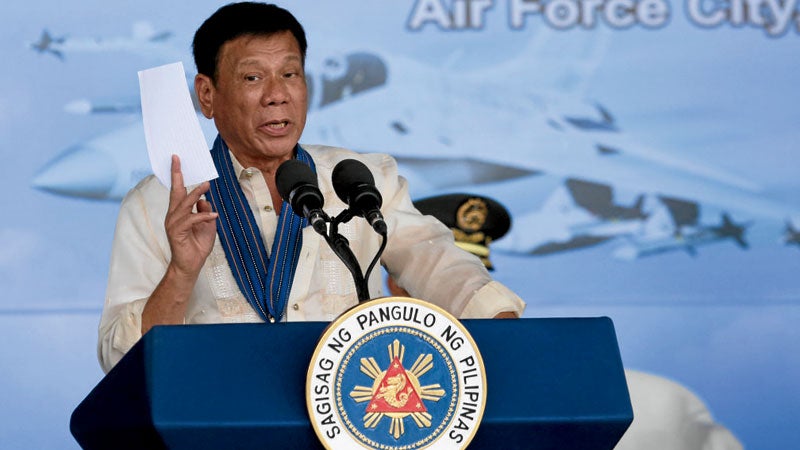 PRESIDENT Duterte on Tuesday offered China conciliatory talks on a long-awaited international tribunal ruling over Beijing’s maritime claims, a week before the verdict.

Mr. Duterte, who was sworn into office last week, said he was optimistic that the UN-backed tribunal in The Hague would rule in favor of the Philippines.

“If it’s favorable to us, let’s talk,” Mr. Duterte said in a speech before the Philippine Air Force at the former US military base of Clark in Pampanga province.

An international tribunal will rule on July 12 in a case the Philippines brought challenging China’s claims to most of the strategically vital South China Sea.

China’s claims extend even close to the coasts of the Philippines and other Southeast Asian nations.

China has said it would reject the ruling and refused to recognize the Permanent Court of Arbitration’s jurisdiction over the issue.

Speaking on national television on Tuesday, Yasay said the Philippines wanted to reestablish closer relations with China ahead of the July 12 ruling by the arbitration court.

“There is a need for special envoy to help us in reaching out on back-channel basis,” Yasay told ANC in an interview on Tuesday.

The special envoy will be named in the next few days.

Mr. Duterte has said he wants friendly relations with China, a departure from his predecessor, Benigno Aquino III, who angered Beijing by launching the legal action and strengthening ties with the Philippines’ longtime ally, the United States.

The Aquino administration argued that China’s claims to most of the South China Sea and its massive island-building program in the disputed waters violated international law.

Aquino refused to hold direct talks with China on the issue, pointing to Beijing’s insistence that its claims were indisputable and thus there was nothing to negotiate.

In contrast, Mr. Duterte previously said he was open to talks with China and even joint ventures to share resources in the sea.

But Tuesday’s comments were his first since he became the President, confirming he was open to talks, which have long been favored by China because of its perceived advantage.

After assuming the presidency, Mr. Duterte said he would not “taunt or flaunt” a favorable ruling.

Ahead of the ruling, Chinese President Xi Jinping said Beijing was “not afraid of trouble” while state-run media urged China to prepare for “military confrontation” in the disputed waters.

Mr. Duterte on Tuesday reiterated he was against any armed conflict. “We are not prepared to go to war. War is a dirty word.”

He added that even if the tribunal ruled against the Philippines, his administration would accept the judgment.

“We will proceed accordingly … We will always decide for the greater interest of our country,”  he said.

The South China Sea is the main maritime link between the Pacific and Indian oceans, where over $5 trillion in ship-borne trade passes annually.

Taiwan, Vietnam, Malaysia and Brunei also have overlapping claims to the waters, which are believed to sit atop vast mineral reserves. Reports from AFP and Estrella Torres