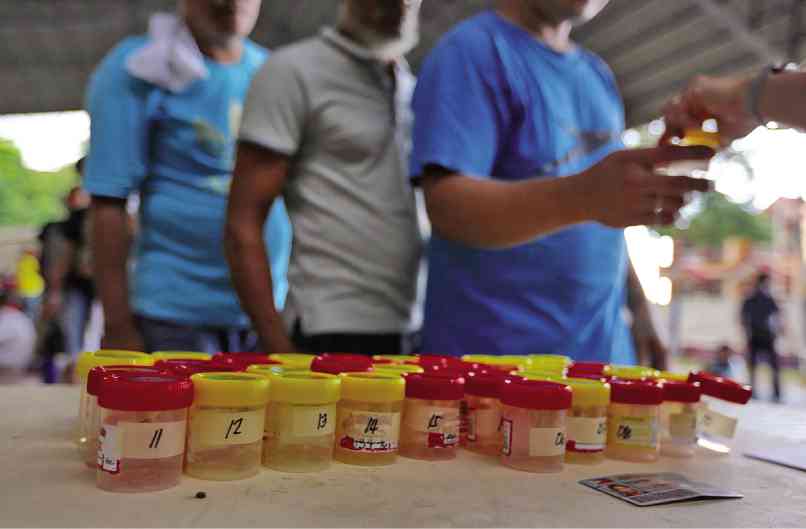 “USER”-FRIENDLY Drug users who have surrendered to the Quezon City police are made to submit urine samples for examination at Camp Karingal. RAFFY LERMA

The killings—and the explanations given by the police to justify them—continue to pile up.

Two brothers in Muntinlupa City added to the growing list of “drug personalities” shot dead by law enforcers, whose operations have drawn impetus from President Duterte’s strongman rhetoric against crime.

The siblings were killed while already in police custody—and handcuffed to each other—after the younger brother allegedly tried to seize the gun of one of the officers escorting them to the hospital in the wee hours of Tuesday.

Rolando Dizon Jr., 34, and his brother Julius, 25, both Barangay Tunasan, Muntinlupa, were first caught playing cara y cruz (coin toss) on Arandia Street around 1:30 a.m., according to PO2 Jeremias Guevarra, one of the arresting officers from the Muntinlupa police intelligence unit.

But when frisked, the two men were found carrying a .38-cal. revolver loaded with four bullets, and suspected “shabu” contained in three plastic sachets and a larger plastic bag, Guevarra said.

Guevarra said the brothers were believed to be working for a group led by Dennis “Langaw” Esmeralda, Muntinlupa’s most wanted drug pusher. Esmeralda was arrested in 2014 for frustrated murder but was freed after the victim’s family agreed to an out-of-court settlement.

Senior Insp. June Reyes, the investigation chief, said the brothers were being escorted by four officers in a Toyota Avanza going to Ospital ng Muntinlupa for a routine medical checkup when Julius used his “free hand” to grab the 9-mm pistol that SPO2 Emme Linah Baldovino kept in her sling bag.

With the Dizon brothers seated right behind Baldovino, Julius reached over to get the gun. He managed to get the gun out and tried to shoot Baldovino, but the gun didn’t fire because the safety catch was still on, Reyes said in a report.

Fearing for Baldivino’s life, the three other officers in the vehicle—PO3 Arnel Rubio, PO3 Leoren Javier, PO2 Jeremias Guevarra—shot the younger Dizon, killing him on the spot.

Rolando, the elder Dizon, was also shot dead because he “also grabbed” Baldovino during the commotion, Reyes’ report said.

In an interview, Reyes explained that both brothers assaulted Baldovino—“pinagtulungan nila”—and that one of them landed a punch on the policewoman before they were shot.

In Manila, the police killed a suspected drug peddler in a buy-bust operation that allegedly went awry. Two more men—including one who was last heard “mocking” the new chief of the Philippine National Police—were also shot by still unidentified assailants.

Supt. Jackson Tuliao, chief of the Manila Police District’s Sta. Cruz station, said a man known only as Rashid and his unidentified cohort  were shot dead by PO1 Alexander Dioso after Rashid “tried to grab” the officer’s gun.

Dioso, Tuliao said, was about to arrest Rashid after the latter sold 100 grams of shabu to undercover agents who met him near Isetann department store on Quezon Boulevard around 3:30 a.m. on Tuesday. Rashid’s cohort who stood “at a nearby alley ” was also shot by Dioso because he drew a gun after seeing Rashid fall.

Meanwhile, 37-year-old Alfred Ceasico was shot dead while inside his house on Kawit Street, Barangay 35, in Tondo, around 11:30 a.m.

“Maniwala ka diyan. Hanggang daldal lang yan (Go ahead and believe him; he’s all talk),” Ceasico allegedly said, according to Ulsano. The station commander said he learned about this from barangay chair Alejandro Ramos.

Members of the MPD’s Smokey Mountain precinct earlier included Ceasico on their list of drug users and couriers in the area, Ulsano said.

Meanwhile, the bullet-riddled body of Reynaldo Estrada, 42, was found at the corner of M. Natividad and Lope de Vega streets in Sta. Cruz, Manila, around 1:10 a.m. on Tuesday. Placed on the body was a piece of bond paper bearing the message: “Huwag niyo ko tularan, pusher ako. (Don’t be a pusher like me).”

The MPD said witnesses earlier saw Estrada being ambushed by three men who were on a scooter without a license plate.

Tuesday’s incidents in Manila brought to 13 the number of killings in the city that were being attributed to the war on drugs since Sunday. Eight of  them were the result of police operations, while the rest bore signs of vigilante-style executions, with the victims dumped on the streets.