CLARK FREEPORT—Moving his antidrug campaign forward, President Duterte named five former and active directors of the Philippine National  Police as drug lord coddlers, and ordered them investigated and the active officers relieved of their posts.

All are graduates of the Philippine Military Academy.

“I am compelled by my sense of duty to tell you everything, especially the policemen who are involved in drugs, one way or another contributing to the deterioration of the law and order of this country,” Mr. Duterte said at rites commemorating the Philippine Air Force’s 69th anniversary.

He ordered the active officials to report to Director General Ronald de la Rosa, the newly appointed head of the 150,000-strong PNP.

“Certainly I would expect the police commission to do their thing. Investigate this and do not give me a zarzuela. Look for the truth,” he said.

Sen. Panfilo Lacson said he had no doubt about the validity of Mr. Duterte’s charges against the five PNP officials.

He said in text messages that he had heard the same information about two of the police officials that the President mentioned from his former officers in the defunct Presidential Anti-Organized Crime Task Force. He did not name the two because he had not validated the previous information.

“All I’m saying is, since the President himself mentioned those two names among the five, he must have good basis in what he divulged, especially if he had a different source of that  information,” said Lacson, a former PNP chief.

He insisted that “the Commander in Chief, more than anybody in this country is in the best position to have access to all these vital and   sensitive  information and I have no reason to doubt or question its validity.”

Sen. Vicente Sotto III said Mr. Duterte’s intelligence information “must be A-1 for him to have done that.”

But Sen. Gregorio Honasan II, a former Army colonel, warned that those accused “should not be subjected to trial by publicity because the children and family who are not involved here are affected.”

It was an honor to join the uniformed service, whether the Philippine National Police Academy or the Philippine Military Academy, at the expense of public money, he said.  And it hurt that the people whom the taxpayers spent for would commit crimes, he added.

“By any language, it is really treason,” he said.

The President said it was not his practice as a politician to humiliate anyone. But he said he had a “sacred obligation to the Filipino people.”

“By my oath of office, I have to tell you the truth,” he said.

He said the names he mentioned had come out even when he was Davao City mayor.

De la Rosa told reporters in an ambush interview that he would be investigating the active officials and expected them to appear before him.

“I will talk to them and I will listen to their explanation,” he said.

He said that he could not compel the retired PNP officials to report to him. But the PNP can investigate and if there was evidence against them, charges would be pursued, he added.

Mr. Duterte warned police personnel against involving themselves in criminal activities and putting themselves in the line of fire, and reiterated his desire for the military to get involved in the battle against illegal drugs.

His anticrime campaign won’t be pretty, but he would take full legal responsibility for anything done in the line of duty, he said. 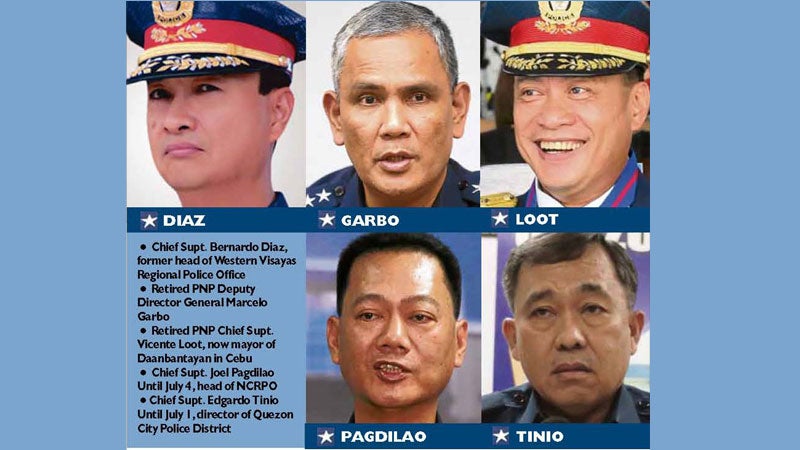 “And may I tell all and sundry, everyone, even the international community, all accidents, cases, any cases under the Revised Penal Code, in the fulfillment of your duties as public authority, that is mine, mine and mine alone. I assume full legal responsibility for it,” he added.

“I am lucky because President (Gloria Macapagal) Arroyo during her watch raised the level of the drug problem as a national security threat and therefore paving the way for me to ask the Armed Forces of the Philippines … to help me in the campaign,” Mr. Duterte said.

At least 23 people have been killed in reported encounters with the police purportedly in connection with the war against drugs since the inauguration of the Duterte administration on June 30.

On Monday, presidential spokesperson Ernesto Abella said the President was aware of the spate of drug killings involving the police and of what appeared to be summary executions of drug suspects.

Mr. Duterte himself has raised the possibility that some of the victims may have been rubbed out to prevent them from implicating policemen involved in drug activities. With reports from Christine O. Avendaño and Marlon Ramos