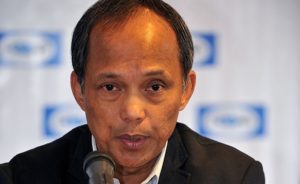 MANILA — The Department of Energy, too, will aggressively wage war against illegal drugs.

Short of issuing a warning, newly installed Energy Secretary Alfonso G. Cusi told the agency’s employees on Monday that none of them should be involved in drugs, as he stressed that “corruption, drugs and criminality will have no place within the DOE organization first and foremost.”

Cusi made the remark during his speech at the turnover ceremony held at the DOE on Monday. “If there’s a drug addict here, kailangan magbagong buhay na (that person should change his life now),” Cusi later added during his first press briefing as the energy chief. “Based on the observations and the study we’ll be making, we will identify what kind of drug testing we are going to do here at the DOE—whether it will be mandatory, if it will be random or if it will be implemented in certain areas. We will have to see. I would like to assume that the DOE is drug free,” Cusi further explained.

Further changes are expected to come within the agency over the next several years, as Cusi revealed plans of a reorganization that will call for the appointment of new heads not only within the DOE but across the attached agencies as well. “On appointments, there is a process. For the past few days, I’ve been here, trying to evaluate the people. There will be changes… and we’re going to reorganize to make sure that we have team that is up to the challenge,” Cusi said.

“Change is coming. Of course, we won’t be doing this in just one day. I’ll be keeping the incumbent office secretary who knows the ins and outs at the DOE, but there will be changes among the undersecretaries, assistant secretaries as well as in the attached agencies like the Power Sector Assets and Liabilities Management Corp. and National Electrification Administration,” he added.

Cusi, who was regarded as an “outsider” in the energy industry, said these changes would be in line with his planned brand and style of management as the energy chief. The target, according to Cusi, is to lead the DOE from the perspective of a consumer.

“You don’t have to be an energy man (or one who has had extensive experience in the energy sector) to be a leader or a manager. As I’ve said, I’m leading the DOE from a perspective of a consumer, while not discounting my responsibility to the utilities (and other stakeholders),” he said.

“The principles of management are the same. It’s just the subject that differs but it’s the same for managing people, assets and goals. I’m the type of leader who is participative, consultative. I involve people (in the processes),” Cusi explained.

Prior to his appointment, Cusi was the chair of Starlite Ferries, Inc., which started to ply the Batangas-Calapan, Mindoro and Roxas-Caticlan routes in 1995. The company led the way in modernizing the Philippine maritime industry with the acquisition of brand-new roll-on, roll-off (Ro-Ro) inter-island vessels from Japan. Cusi’s experience in the public sector, meanwhile, included stints as the director general of the Civil Aviation Authority of the Philippines (CAAP), general manager of the Manila International Airport Authority (MIAA) and general manager of the Philippine Ports Authority (PPA).  SFM/rga