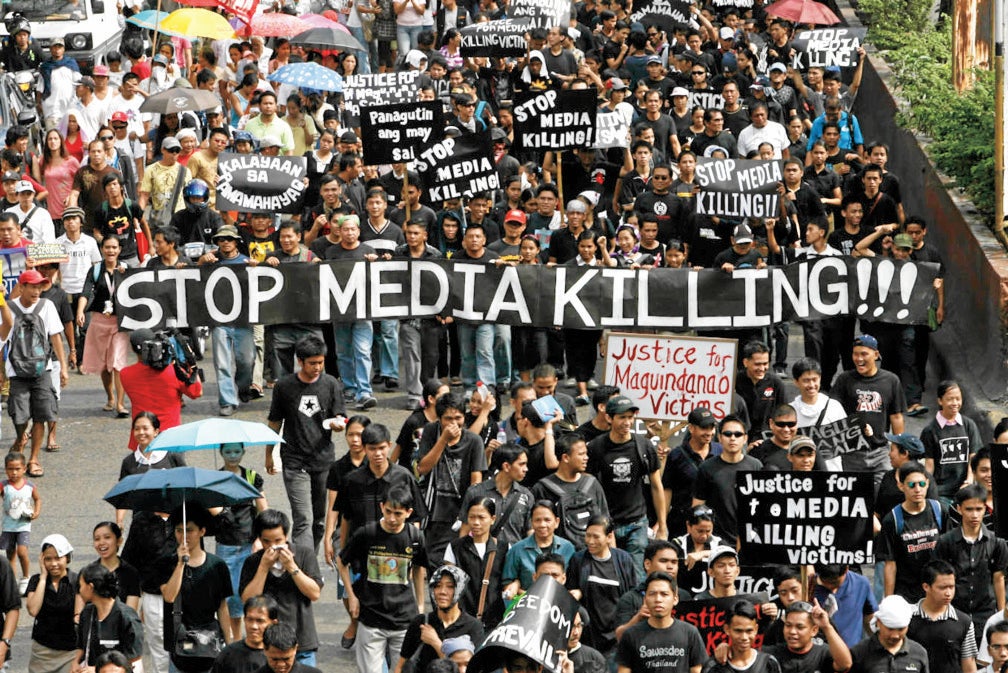 FROM the restoration of democracy in 1986 to June this year, more than 200 journalists have been killed in the Philippines, according to monitoring by Inquirer Research.

The monitoring is based on reports from Inquirer Archives and lists from the National Union of Journalists of the Philippines (NUJP), Center for Media Freedom and Responsibility, International Federation of Journalists and Committee to Protect Journalists (CPJ).

Of the total number, 41 were killed during the administration of President Benigno Aquino III.

But the number of victims was higher during the time of President Gloria Macapagal-Arroyo, when 107 journalists  killed.

Under the administrations of Presidents Joseph Estrada, Fidel Ramos and Corazon Aquino, the body count reached 7, 16 and 37, respectively.

The NUJP, which has reported 176 killings as of June, cited some of the most prominent cases, including the murders of Edgar Damalerio of Pagadian City, Marlene Esperat of Tacurong City, and Gerry Ortega of Puerto Princesa City, and, the “most heinous of all,” the Maguindanao massacre.

The massacre, considered one of the deadliest attacks against journalists, took place in Maguindanao province on Nov. 23, 2009, with 32 media journalists among 58 people killed by the Ampatuan warlord clan intent on stopping a rival’s electoral challenge.

Close to 200 people are on trial, including members of the Ampatuan family accused of orchestrating the carnage.

On May 31, a day after his proclamation, President Duterte was asked how he would deal with the problem of journalist killings in the Philippines after a recent shooting of a reporter in Manila.

“Even if you’re a journalist, you are not exempted from assassination if you’re a son of a bitch,” he said, igniting a local and international firestorm.

He said there was justification for killing corrupt journalists, but “if you are an upright journalist, nothing will happen to you.”

His allies later said that he was simply misquoted, and that he only made an observation about corrupt journalists who were acting as mercenaries. Inquirer Research