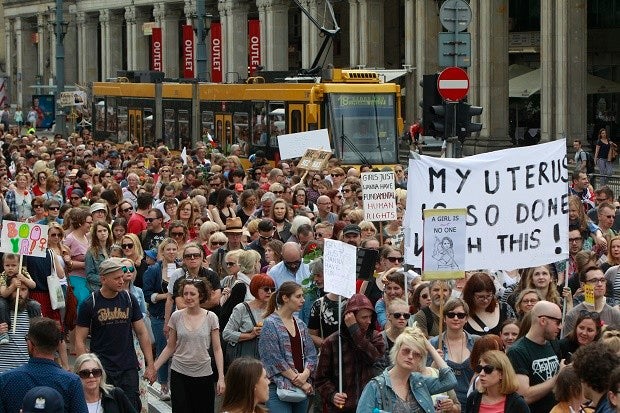 PRENZLAU, Germany—A 35-year-old woman rests on her hospital bed in Germany after an abortion. Her staunchly Catholic country, Poland, has one of Europe’s most restrictive termination laws, so she and her partner drove just over the border.

“We told no one. Because I know it’s forbidden, because I was afraid, even of people’s reactions,” said the mother-of-one who wished to remain anonymous.

Now Poland is mulling a near-total ban, even as tens of thousands of women opt for sometimes risky illegal abortions or, if they can afford it, travel to foreign hospitals like this one in the town of Prenzlau.

When the woman and her partner learnt they were having twins, they were overjoyed. Then there were complications. One died. Doctors could not say for sure if the other would be healthy.

“It’s a hard decision for everyone, traumatic. I simply had really bad test results,” the woman, a lapsed Catholic, told AFP.

Passed in 1993, the current legislation bans all terminations unless there was rape or incest, the pregnancy poses a health risk to the mother or the foetus is severely deformed.

This week, anti-abortion activists plan to submit a petition to parliament, controlled by conservatives since November, that would allow abortion only if the mother’s life is at risk.

Such citizen’s initiatives are admissible with at least 100,000 signatures—this one has garnered more than 375,000—and usually end up in a parliamentary vote.

The initiative calls for increasing the maximum jail penalty for practitioners from two years to five. It also makes mothers liable, though judges could waive punishment in their case.

Abortion “is just as wrong as allowing the murder of any other group of people,” said Mariusz Dzierzawski, 60, head of the pro-life group behind the project.

“It’s like how the Germans said it was okay to murder Jews. And children before birth are an even broader category,” the father of three adult daughters told AFP.

The proposal has also won the backing of top bishops, though its provisions to penalise women have since divided the Church.

The leader of the governing conservative Law and Justice (PiS) party, Jaroslaw Kaczynski, said, “On these kinds of issues, as a Catholic I follow the teaching of the bishops.”

But as a lifelong bachelor, he was quickly challenged by former first lady and mother-of-eight Danuta Walesa: “What do you know about the life of bees since you don’t live in a beehive?”

The proposal, which the Council of Europe called “serious backsliding on women’s rights,” also inspired several pro-choice marches and a rival drive to liberalise the law.

There are signs the conservatives are aware the hot button issue divides Poles. Dzierzawski said PiS politicians initially tried to talk him out of presenting the initiative.

One 53-year-old Warsaw woman, who spoke on condition of anonymity, told AFP she got pregnant at 21 and panicked.

“I was trying to get into college. I thought everything was falling apart. All my plans…,” she said.

She chose to abort, against her boyfriend’s wishes. They wound up marrying and having two children before he left. She blames the abortion.

“When I think about grandkids, then I remember what happened. That there could have been more kids,” she said. “It’s starting to eat away at me, oppress me. And it will be like that for the rest of my life.”

Arguing that restricted access gives women a chance to think twice, she backs the status quo.

As do most Poles, according to an April survey from independent pollsters CBOS, which saw support for the exceptions range from 58 percent (incest) to 84 percent (risk to mother’s life).

Only a little over 10 percent said a woman should be allowed to abort if she is in financial straits or does not want children.

Yet another CBOS survey from 2013 found that every third or fourth Polish woman has had an abortion.

“It’s do as I say, not as I do,” said Krystyna Kacpura, director of the pro-choice Federation for Women and Family Planning.

The country of 38 million people sees under 2,000 legal abortions a year, but Kacpura estimates that another 100,000-150,000 procedures are performed illegally or abroad.

One Slovak clinic even has a Polish-language website and phone line, plus drivers who will pick women up at designated spots in several Polish cities.

The public hospital in Prenzlau does “quite a few” Polish surgical abortions, according to Janusz Rudzinski, a Polish doctor there who has lived in Germany for decades.

“They’re mostly middle-class, but actresses also come, famous too. Politicians’ wives, bank directors,” he told AFP, saying he has even had the occasional nun or priest plus girlfriend.

For those who stay home, there are Internet offers of pills that “induce menstruation” or doctors like an anaesthesiologist arrested last month for performing a medical abortion on the sly.

Other doctors have signed a conscience clause, opting out of performing abortions, even the legal ones. The southern Podkarpackie region made headlines when every doctor signed.

Rudzinski said he gets around 50 calls a day from Poland, not always for appointments. Many women just need an ear.

“In Poland, they simply don’t have anyone they can honestly talk to right now,” he said.

Is there any such thing as ‘safe’ abortion?