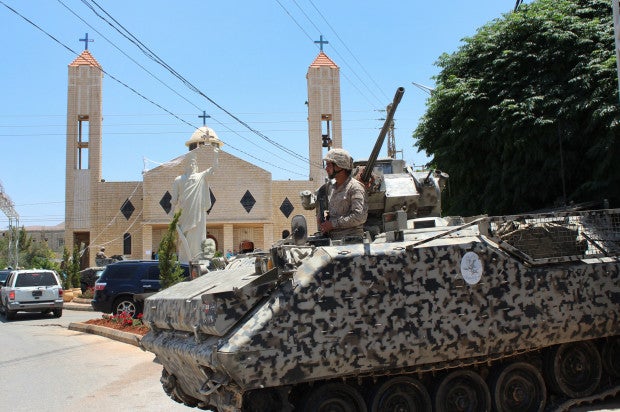 A Lebanese army soldier from the special forces unit stands on a APC during a patrol in front a church in Qaa, a predominantly Lebanese Christian village near the Syrian border were suicide bombers blow themselves among civilians on Monday, eastern Lebanon, Tuesday, June 28, 2016. Lebanese troops detained 103 Syrians for illegal entry into the country, in a security sweep on Tuesday, a day after a series of deadly bombings struck a village near the border with Syria, the military said. The unprecedented attacks nine explosions in all, eight of them suicide bombings triggered fear and panic among residents of Qaa village and a deepening sense of foreboding in Lebanon, which has grappled for over five years with spillovers from neighboring Syria’s civil war. AP

BEIRUT, Lebanon — The Lebanese militant group Hezbollah says it has killed the Islamic State of Iraq and Syria (ISIS) military commander for the Qaa border area in Lebanon, where a series of suicide bombings and other attacks killed five people earlier this week.

Hezbollah’s media outlet Al-Manar said the group, which shares security responsibilities with the Lebanese army in areas along the eastern border with Syria, killed a commander known as Abu Khatab in a rocket attack. The army did not release any comment.

Hezbollah, which also participates in Lebanon’s government, has blamed the Qaa attacks on IS.

Violence from neighboring Syria’s civil war has spilled across the border in the past. ISIS and al-Qaida militants briefly seized the Lebanese border town of Arsal in 2014, before security forces pushed them back across the frontier.