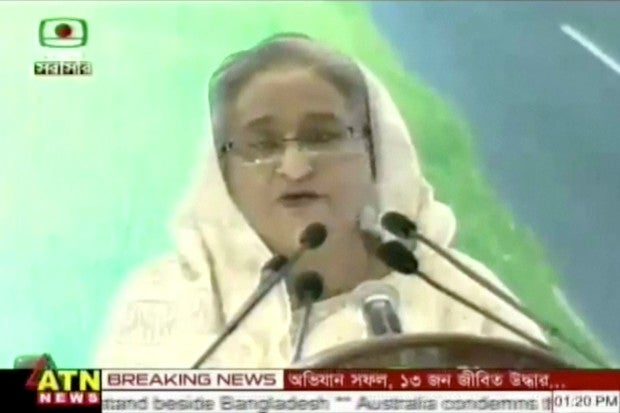 In this image made from video provided by ATN News, Bangladesh’s Prime Minister Sheikh Hasina makes a nationally televised speech regarding the militant hostage-taking at a restaurant popular with foreigners in Dhaka, Bangladesh, Saturday, July 2, 2016. Hasina condemned the attack, which was claimed by the Islamic State of Iraq and Syria (ISIS) group, and she said security officials arrested one of the militants. Bangladeshi forces stormed the Holey Artisan Bakery in Dhaka’s Gulshan area where heavily armed militants held dozens of people hostage Saturday morning, rescuing some captives including foreigners at the end of the 10-hour standoff. AP

DHAKA, Bangladesh — Bangladesh’s Prime Minister Sheikh Hasina pleaded with Islamist extremists to stop killing in the name of religion Saturday after 20 hostages were killed in a siege at a Dhaka restaurant.

“Islam is a religion of peace. Stop killing in the name of the religion,” Hasina said in a televised address to the nation in which she declared two days of mourning.

“Please stop tarnishing our noble religion… I implore you to come back to the rightful path and uphold the pride of Islam.”

The prime minister, whose government has been unable to stop a growing wave of attacks on foreigners and religious minorities, urged a nationwide effort to combat extremism.

She asked people to set up “anti-terrorism committees” in districts and sub-districts across the mainly Muslim but officially secular country.

The 68-year-old premier said the people behind the attacks were trying to ruin Bangladesh.

“By holding innocent civilians hostage at gunpoint, they want to turn our nation into a failed state,” she said.