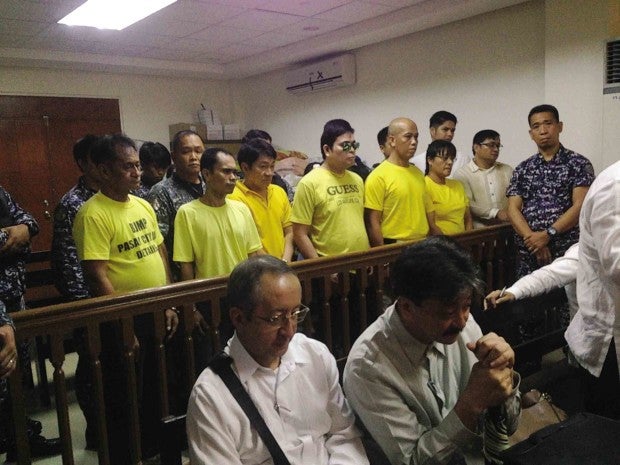 Five people—including a former vice mayor in Cavite province and two former police officials—were found guilty of kidnapping and killing a businessman and his driver in June 2008.

They were arrested and put on trial for the kidnapping and murder of retired pilot and businessman Demosthenes Cañete and his driver Allan Garay.

Carungcong was Canete’s brother-in-law. Exequiel Cautiver was then training director of the Philippine National Police Special Action Force (PNP-SAF) school in Sta. Rosa, Laguna, and a graduate of the PNP Academy Class of 1996. Entolizo, Cautiver’s cousin, was a barangay tanod (village watchman) of Bangkal, Makati City. De Leon was the gunman hired to kill the two victims.

“But our fight isn’t over. The decision could still be reversed; the case could go all the way up to the Supreme Court,” said Joan, a lawyer who became a member of the Movement for the Restoration for Peace and Order (MRPO), a group that assists families of kidnap victims and monitors the progress of their cases.

One suspect, PO1 Reniel Abogado, remains at large. A sixth accused, pedicab driver Gary Pateo, who was arrested for receiving the ransom money delivered by the Cañetes and handing it over to Entrolizo, was acquitted “on the ground of reasonable doubt,” the ruling said.

The police said a fight over the control of a family-owned business in Cavite could be the motive behind the kidnapping and murder of the victims.

Investigators gathered that on June 27, 2008, the 67-year-old Cañete and the 26-year-old Garay failed to return home after visiting the business establishment at the Land Transportation Office (LTO) compound in Sabang, Dasmariñas.

According to Cañete’s wife, between the day of their disappearance and July 4, she received numerous calls demanding a P20-million ransom for their release. On two occasions, she was able to talk to Cañete, who told her that he was suffering (“hirap na hirap na”) and couldn’t take it anymore (“hindi ko na kaya”).

Cañete’s family managed to raise only P973,000 in ransom money, which the kidnappers accepted. The family and the police then set an entrapment operation in the wee hours of July 4, timed with the delivery of the ransom in Malibay, Pasay, resulting in the arrest of Entrolizo and Pateo.

Carungcong and Exequiel Cautiver were also arrested later that day, followed by Penelope Cautiver on July 23.

A state witness, PO1 Ric Selga, who at the time was assigned to the SAF Training Camp, pointed to Carungcong and the Cautiver couple as the masterminds. He recalled overhearing a meeting wherein Carungcong asked Exequiel Cautiver to find him a hired gunman who could kill his brother-in-law.

Entrolizo also confirmed that it was the male Cautiver who ordered the ransom pickup.

De Leon was identified by Selga as the gun-for-hire who shot the two victims dead.

The body of Garay was found in a creek at Sapang Bakaw, Gaci compound in Valenzuela City while that of Cañete was recovered in July 2008 at the Porac Megadike area in Pampanga province. Both corpses were riddled with gunshot wounds.

After a series of follow-up operations, De Leon was arrested in Leyte province in 2010.

In Friday’s court decision, the five convicts were also ordered to pay Cañete’s family P50,000 as civil indemnity and P425,670 as reimbursement for burial expenses. For Garay’s family, it’s P50,000 for moral damages, P30,000 for exemplary damages, and P50,000 for civil indemnity.

The operations leading the arrests were handled mainly by a now-defunct PNP unit called Pacer (Police Anti-Crime and Emergency Response).

A call to Duterte admin

“While this is a reminder that there are still bad seeds in the [police] force, let this case also be a tribute to the policemen who worked hard and pursued the suspects, even if they were their colleagues,” said Teresita Ang See, MRPO founding chair.

Joan, however, admitted they were “saddened by the pace” of the case.  “We diligently followed it up but it still took eight years. What if we didn’t have the resources? So many cases remain unresolved because of failure to prosecute, because it takes so long.”

“Let this serve as a call to the new administration: Our justice system badly needs an overhaul,” See stressed. With Inquirer Research