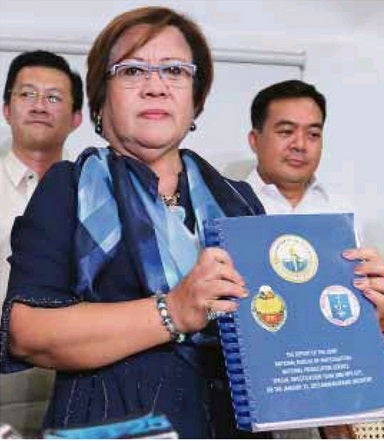 MANILA, Philippines—Senator Leila de Lima on Friday defended former President Benigno Aquino III as he faced criminal charges for the death of elite police operatives in the January 25, 2015 carnage in Mamasapano, Maguindanao, saying the “absurd” case may not even pass preliminary investigation.

De Lima, who was Justice Secretary at the time of the incident, said the filing of multiple homicide charges against the former President a day since he left office was “nothing but a media stunt.”

READ: Citizen Noy faces homicide raps for Mamasapano carnage
“No amount of legal imagination can manipulate the definition of homicide and murder under the Revised Penal Code so as to implicate the police officials involved and President Aquino himself,” said De Lima in a statement sent to the Inquirer.

“The filing of charges is nothing but a simple media stunt and the families are letting themselves be used by political actors who continue to pillorize President Aquino for this most unfortunate incident in his administration,” said the newly elected Senator when asked to comment on the charges.

De Lima has long stood by her position that Aquino may not be held liable for the massacre, even back to the time her prosecutors at the Department of Justice were investigating the death of 44 Philippine National Police Special Action Force (PNP-SAF) officers in the incident.

“The families and relatives should instead support and push for the immediate filing of charges against the men actually identified to have engaged the SAF 44 in a firefight in Mamasapano and push for the commencement of the criminal trial,” said De Lima.

She said it was clear who were behind the men’s death: gunmen who belonged to the Moro Islamic Liberation Front, the Bangsamoro Islamic Freedom Fighters, and private armed groups./rga