Duterte arrives at Malacañang to take oath as president 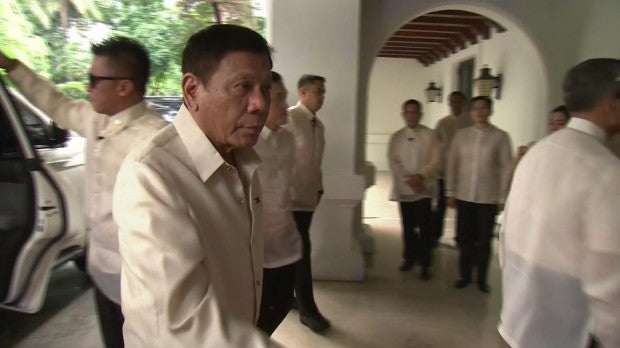 President-elect Rodrigo Duterte on Thursday morning arrived in Malacañang less than two hours before he takes his oath as the 16th President of the Republic of the Philippines.

Duterte arrived at 10:25 a.m. at the Malacañang grounds amid rains. The incoming President was wearing a barong Tagalog made from piña jusi fabric paired with black pure cotton pants.

READ: Duterte to be sworn in as president, launch crime war

Before taking his oath, Duterte will call on President Benigno Aquino III in his Malacañang office, for one-on-one talks.

After the meeting, Aquino will be given departure honors, then he rides to his Quezon City home at Times Street.

READ: Aquino legacy: Democracy and stability–warts and all

There will be a short program before Duterte takes his oath of office.

At 11:45 a.m., Duterte will take his oath before Supreme Court Justice Bienvenido Reyes.

After his own oathtaking, Duterte will administer a mass oathtaking for all incoming members of his Cabinet.

The camp of Duterte has said that 627 guests were invited, which included ambassadors, incoming Cabinet members and Duterte’s family members. CDG

READ: No invite, no entry: Tight security at PICC for Duterte inaugural