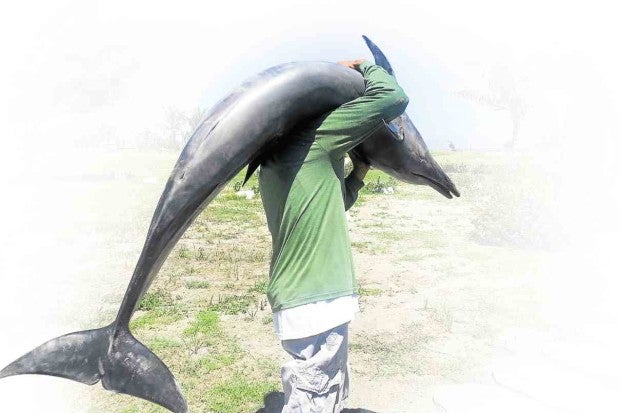 A WORKER carries a dolphin’s carcass for burial at the fish cemetery inside the Bureau of Fisheries and Aquatic Resources compound in Dagupan City. WILLIE LOMIBAO/INQUIRER NORTHERN LUZON

DAGUPAN CITY—A dead bottlenose dolphin was spared from being cut up to pieces and taken to a fish cemetery here instead.

The dolphin died on Tuesday after it got caught in a fisherman’s net in the Lingayen Gulf.

The dolphin, a female, was still alive but weak when a fisherman found it trapped in his net around 8:30 p.m., according to Bonuan Gueset village chair Ricardo Mejia.

The dolphin was carried to shore where it died hours later.

Mejia said he took custody of the dolphin when he learned that villagers want to butcher it. Butchering endangered animals is against the law.

Mejia said he turned over the dead dolphin to the National Integrated Fisheries Technology Development Center (NIFTDC) here, where it was buried in the fish cemetery.

Westly Rosario, NIFTDC chief, said the dolphin had no signs of external injuries. But its snout was bleeding, an indication of internal injuries caused by blast fishing, Rosario said.

Earlier this month, Consuelo Perez, former Board of Investments governor, complained of unabated blast fishing in the Lingayen Gulf, which, she said, could be heard from her house in nearby San Fabian town.

This was the first reported dolphin beaching here this year.

In January last year, at least 17 injured bottlenose dolphins were found beached in the coastal areas of the Lingayen Gulf from Alaminos City in Pangasinan to Aringay town in La Union.

Rosario said dolphins come to the Lingayen Gulf to look for flowing water whenever they are ill. He said the West Philippine Sea is a natural marine migration path and dolphins usually swim by the gulf in search for food. Gabriel Cardinoza, Inquirer Northern Luzon