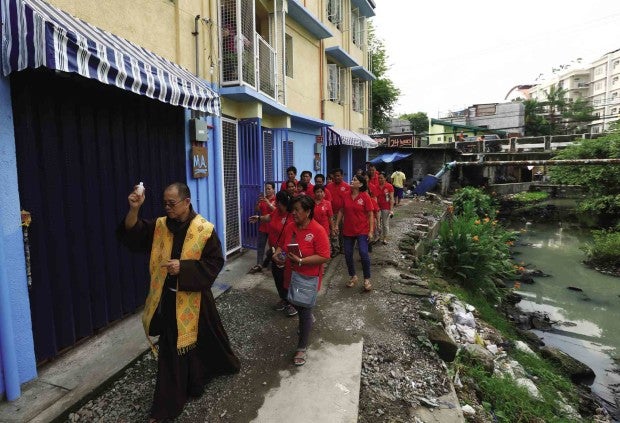 FINISHING TOUCH A row of mid-rise homes for Manila residents displaced by a fire in 2011 is inaugurated on Wednesday, one of the last projects to be completed by the Aquino administration which officially ends at noon today. The blessing was officiated by Father Robert Reyes, also known as the Running Priest. EDWIN BACASMAS

On the last full day of the Aquino administration, the Department of Social Welfare and Development (DSWD) turned over newly built homes to  some 300 Manila residents whose slum community was destroyed by a fire in 2011.

The DSWD on Wednesday inaugurated medium-rise houses built for a batch of 21 families in Barangay 412, Zone 42, near Estero de San Miguel-Legarda in the Sampaloc district.

The construction of the units, measuring 18 square meters each, got its share of funds from the P50-billion allocation approved by President Aquino for urban resettlement programs, including in-city housing in Metro Manila. It was not immediately known how much was exactly spent for the Sampaloc project.

Social Welfare Assistant Secretary Felipe Ramiro Jr. said the beneficiaries were among the 167 families who lost their homes in a fire that hit their Sampaloc neighborhood on Dec. 26, 2011. They received certificates of occupancy good for 25 years but subject to certain conditions.

Another batch of families was already relocated to J. Nepomuceno Street, Kalye Tanduay, according to Princess Asuncion-Esponilla, media officer of Urban Poor Associates (UPA), a DSWD partner in the project.

Esponilla said that under the terms set by the DSWD, a family will just pay less than P500 monthly to the homeowners association—the Nagkakaisang Mamamayan ng Legarda—as maintenance fees.

Another major condition requires them to keep their surroundings clean, orderly and free of eyesores. “They should be able to maintain (the units). They are not allowed to hang their laundry in front of the units, for example,’’ the UPA officer said.

“This is a major shift away from the traditional off-site relocation which failed to provide permanent housing solutions,’’ UPA executive director Alicia Murphy said. “We are hopeful that, like the Aquino administration, incoming President Rodrigo Duterte will support the people’s plan. We believe this is a realistic solution to the country’s housing problem.’’