Surprise! Duterte’s 15-minute speech will be free of curses 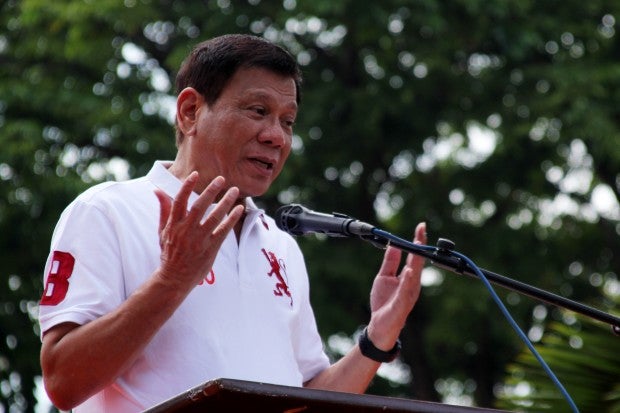 President-elect Rodrigo Duterte shows up for his last flag-raising ceremony as mayor at the Davao City Hall.
PHOTO BY ACE MORANDANTE / CONTRIBUTOR

If Rodrigo Duterte sticks to what he practiced on Tuesday, he will be delivering a 15-minute inaugural speech on national television, including pauses for possible applause, shortly after he is sworn in as the country’s 16th President at noon today.

His daughter, Veronica, will be holding the Bible during the ceremony in Malacañang. His fraternity brother, Supreme Court Associate Justice Bienvenido Reyes, will administer the oath of office.

“Of course, the prepared speech doesn’t have curses,” a source, who asked not to be named as he was not authorized to speak on the matter, told the Inquirer.

Duterte, the city’s tough-talking mayor who won the presidency in the May 9 elections on a campaign platform of unrelenting war on criminality and corruption, is known to give hourlong speeches laced with expletives and mostly extemporaneous.

He earlier announced that his inaugural speech would only take five minutes, but he later said he was just joking.

On Tuesday night, Duterte had a read-through of his speech at the so-called Malacañang of the South in Barangay Panacan here, according to the source.

The speech ran for about 12 minutes, “but our estimate is it will be 15 minutes long, including pauses for the expected applause,” the source said.

“He even laughed when at first reading, the speech went over the five-minute  mark,” the source said.

The rehearsal had nothing to do with Duterte being nervous about delivering his first speech as President, the source said.

“He’s not nervous at all. It was conducted for him to get used to looking at the teleprompter,” the source said. “Besides, the President doesn’t need coaching.”

Another source who was present during the practice, said the speech was in English.

“He was good,” the source said, adding that it might be the “metamorphosis” Duterte promised for when he becomes President.

In a press conference on June 2, Duterte admitted that he was “enjoying” the remaining days as a rude person.

“When I become President, when I take my oath of office, it will be  a different story. There will be a metamorphosis,” he said.

It was to be his last meeting with journalists. He later announced that he was not holding any more press conferences as a reaction to a call for a media boycott by the Paris-based Reporters Without Borders after he said some journalists were killed because they were corrupt.

Guests attending the inaugural ceremony will gather at the Philippine International Convention Center in Manila this morning for breakfast and will leave for Malacañang by bus.

If plans push through, Duterte will be wearing a barong for the ceremony, one of 12 designed for him by Chardin Davao, a high-end fashion house here.

Chardin Davao also made a green gown for Duterte’s common-law wife, Honeylet Avanceña, and a beige dress for their daughter, Veronica.

In an earlier interview, Zimmerman, who is battling Stage 3 breast cancer, said she chose pink because the color represented breast cancer awareness.

Duterte’s daughter with Zimmerman, incoming Davao City Mayor Sara Duterte-Carpio, will be wearing a royal blue gown made by Anglacer.

His eldest son, Paolo, had a barong made by local designer Erwin Lee  Tan, while the youngest son, Sebastian, will be wearing a Mindanao silk barong made by the Davao Fashion and Design Council.