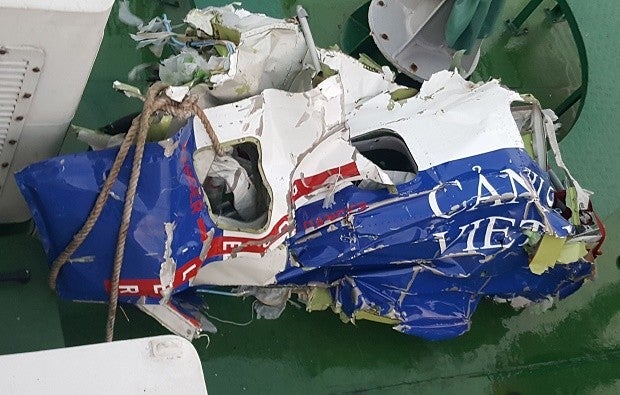 The wreckage of a maritime patrol aircraft that went missing is seen on a maritime police vessel off the coast of northern port city of Hai Phong, Vietnam, Friday, June 17, 2016. Vietnamese rescuers have found some pieces belonging to a search plane that went missing with nine people aboard while attempting to locate a pilot from a crashed fighter jet, the military said Friday. AP

HANOI, Vietnam — Vietnam’s military says the bodies of eight crew from a search plane that crashed two weeks ago while looking for a missing fighter jet have been recovered.

The Ministry of Defense said Wednesday that authorities are still searching for the remaining military person from the plane.

The ministry said that maritime patrol aircraft’s black boxes, which recorded voice in the cabin and flight data, have been recovered and are being analyzed to try to determine the cause of the crash.

The Airbus-manufactured Casa-212 aircraft crashed near Bach Long Vi island in the Gulf of Tonkin on June 16 while searching for a fighter jet that went down two days earlier on a training flight.

The two crashes are the latest in a string of accidents involving the Vietnamese military.