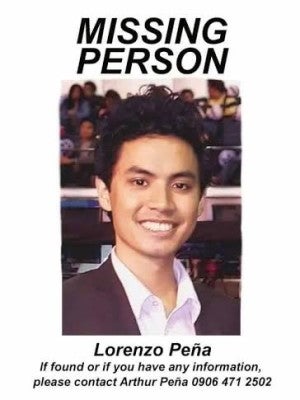 The search for missing 22-year-old call center agent Lorenzo Peña tragically ends with the discovery of his body in a Makati building basement. (Photo courtesy of the Peña family.)

MANILA — The body of a call center agent was found floating on the fifth level basement of an unfinished building in Makati City on Monday, three days after he was last seen by family and friends.

Lorenzo Peña, 22, a resident of Sun Valley Subdivision in Parañaque City, was discovered dead at No. 3 Hernandez St., Barangay San Lorenzo Village, in Makati City, about 3:30 p.m. of June 27.

The daughter of the building’s caretaker told the police that she saw a man, later identified as Peña, enter the compound and the building’s stockroom on Friday, June 24, about 9:30 p.m.

SPO2 Rico Caramat, case investigator, said Regine Dioleste was frightened and called the barangay officials when she heard Peña seemingly throwing a tantrum inside the stockroom.

The Bantay Bayan of Barangay San Lorenzo conducted a search up to the third level basement and did not find him.

Percival Dioleste, the caretaker, found the victim’s ID in the stockroom and called Peña’s father as indicated in the emergency contact.

On Sunday evening, Peña’s sister posted on Facebook that he was missing.

The father, Arthur Peña, together with barangay officials went to the building on Monday and found the body floating facedown in floodwaters at the fifth level basement.

The body was brought to Evergreen Funeral in Pasig City for autopsy upon the family’s request.  SFM