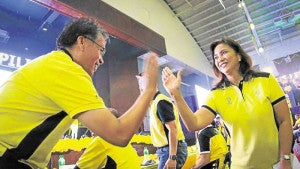 The Liberal Party leader confirmed this on Tuesday afternoon, telling reporters:  “Isa tayo sa mga kababayan na natutuwa sa pagkapanalo ni Leni (We are among the Filipinos who are happy with the victory of Leni).”

Roxas was in Cebu City to attend the oath-taking of ally, Mayor Tomas Osmeña, and the rest of the councilors who won under BO-PK (Bando Osmeña Pundok Kauswagan), which had allied with the Liberal Party during the May 9 polls.

Roxas said he also wanted to thank the Cebuanos for voting for him last elections.

The LP standard bearer, who received at least 600,000 votes, came in second to President-elect Rodrigo Duterte who garnered more than one million votes in Cebu.

Asked what kept him busy in the past weeks after the elections, Roxas said he took a much needed rest and went to provinces to personally thank those who supported and voted for him.

Roxas accompanied Osmeña in receiving Robredo who arrived past 5 p.m. to officiate the oath-taking at the Cebu City Sports Center here.  SFM