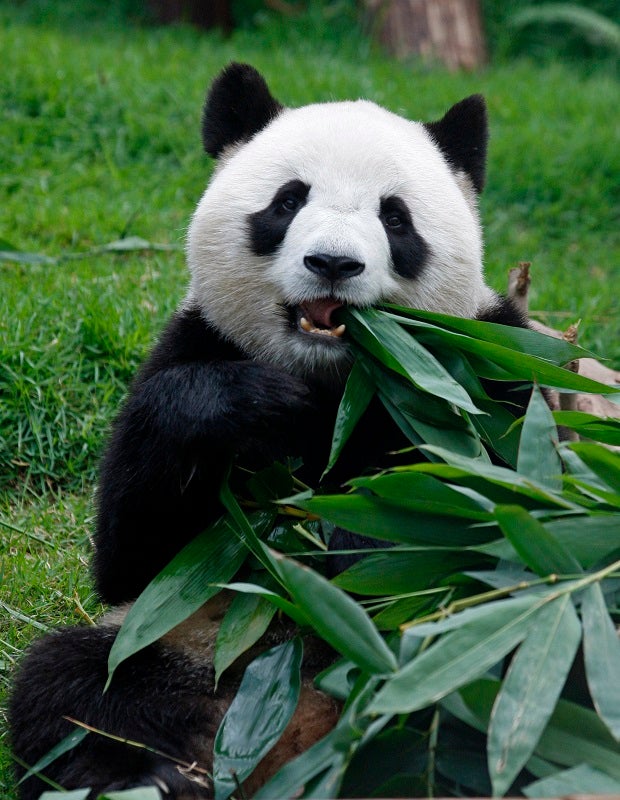 In this June 21, 2011, photo, Macau’s giant panda Xin Xin eats bamboo leaves in Seac Pai Van Park in Macau. Macau says the female half of a giant panda couple that was a gift from Beijing has died from kidney failure. Macau’s panda park said that Xin Xin, which was nearly six years old, was declared dead at 8:18 p.m. on Sunday, June 22, 2014. AP

An endangered giant panda in captivity has successfully given birth to twins in Macau, the first pandas to be born in the Chinese special administrative region.

According to officials of Giant Panda Pavilion in Coloane, Macau, Xin Xin delivered the two male cubs on Sunday afternoon.

The cubs were born nearly an hour apart, as the larger cub weighed 138 grams, while the smaller one scaled at just 53.8 g.

The twins, along with their mother, were reportedly in good health. However, the smaller one was underweight and was quickly taken into intensive care.

Xin Xin and her stablemate Kai Kai were a token from the mainland and arrived in the pavilion just last year.

They mated naturally, a report from BBC News said, but Xin Xin was also artificially inseminated with sperm from Kai Kai, just to be sure.

The panda pavilion has long been thrilled for Xin XIn’s pregnancy and has been closed to the public since June 14 to prepare for her delivery.

Pandas, whose numbers have dwindled in recent years, have been notorious for their reluctance to breed.

It also does not help that female pandas have a very narrow window in which they can conceive, which only occurs once a year.

Scientists attribute the animal’s lack of sex drive to its diet and weight , which often forces handlers to resort to artificial insemination because they don’t want to miss the opportunity. Khristian Ibarrola