Belmonte rules out impeachment vs Duterte 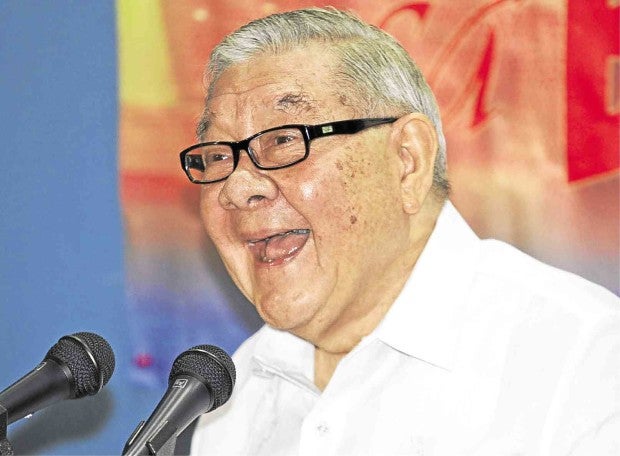 Outgoing Speaker Feliciano Belmonte Jr. on Tuesday ruled out the possibility of leading an impeachment trial against President-elect Rodrigo Duterte in the 17th Congress to favor Vice President-elect Ma. Leonor “Leni” Robredo, who comes from the Liberal Party.

“Zero,” Belmonte said of the chances of impeachment in an interview after the turnover of the 1935 bronze bust of national hero Jose Rizal by Guillermo Tolentino to the House of Representatives.

Belmonte branded as “intrigues” or speculation that the Liberal Party would lead an impeachment proceeding against the President-elect so that Robredo would take Duterte’s place in Malacañang.

Belmonte said in his 18 years as congressman he has been through several impeachment proceedings—against former President and now reelected Manila Mayor Joseph Estrada (who stepped down after an aborted impeachment trial amid a people’s uprising and was convicted but pardoned for plunder over jueteng money), former Ombudsman Merceditas Gutierrez (who resigned from her post after the House impeached her), and the most recent, the late Chief Justice Renato Corona, who was impeached over false declarations of wealth.

Belmonte said he saw no reason for Duterte to be impeached this early.

“I myself have been part of a number of impeachment… Definitely, I don’t see any reason whatsoever for the President to feel this if he does, or to include it in his thinking,” Belmonte said.

Belmonte said with Congress dominated by members of political parties which have aligned themselves with the majority coalition supportive of Duterte, “the chances (of impeachment) is zero and nobody will even think of it.”

He said Congress should instead give Duterte a chance to prove himself as the country’s President.

“Let’s give the new President the chance to run the country without talk of impeachment,” Belmonte said.

“Let’s look forward to great achievements for our people, instead of talking about negative ideas like impeachment. We’re doing ourselves a big disservice by doing that,” he added.

In his speech during the flag ceremony in Davao City on Monday, Duterte said he was not afraid of any impeachment attempt against him, vowing to risk his life and honor to fulfill his campaign promise of curbing criminality and corruption.

Duterte has also said he would close Congress should an impeachment attempt be made against him.