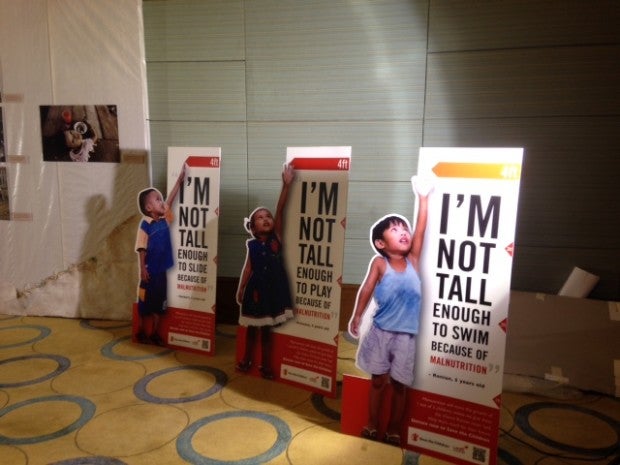 Save the Children standees represent a Filipino child’s stunting problem due to chronic malnutrition. PHOTO BY MEG ADONIS/INQUIRER.net trainee

Child rights group Save the Children is hopeful that President-elect Rodrigo Duterte would continue to support its campaign against chronic malnutrition among Filipino children.

In its “Reach” ad launch for the “Lahat Dapat” campaign against hunger and child malnutrition on Tuesday, Save the Children Health and Nutrition advisor Dr. Amado Parawan said that the country might face a weak and incapable labor force in the future if the worsening state of chronic and acute malnutrition among children is not addressed.

“We know that the problem ultimately affects the poorest families. This should stop. Therefore, we call [on] the new President to prioritize child malnutrition and ensure that nutrition services are highly targeted as he has shown in Davao City where he funded nutrition programs and interventions,” said Parawan in a statement.

According to Save the Children, one in three Filipino children is suffering from stunting, which is caused by malnutrition during a child’s growing years.

The organization’s “Reach” advertisement highlighted the long-term effects of stunted growth among children and will be shown in cinemas throughout the National Nutrition Month in July.

Malnutrition in the Philippines

Malnutrition among children is one of the most pressing health concerns in the Philippines, with about 2.7 million Filipino children experiencing hunger due to a lack of food and extreme poverty. With about 4 in 10 Filipino households unable to provide meals due to poverty, the Philippines ranks 4th in the Top 10 countries worldwide with malnourished children. However, worldvision.org listed the Philippines as the 7th out of 9 countries worldwide with the weakest commitment to ending child malnutrition.

This lack of adequate food and nutrition also leads to the ‘stunting,’ or being too short for their age, in 33% or 1 in 3 of all Filipino children. Save the Children noted that, aside from a lack of regular access to food, one of the biggest causes for stunting among children is a lack of nutrition during their first 1,000 days. The Philippines currently ranks 9th among countries with the highest number of stunted children, which also negatively affects health, school performance, labor force participation, and productivity once they grow up.

Save the Children launched its ‘Lahat Dapat’ campaign due to this pressing issue of child health and nutrition in the country.

“We are trying to raise awareness that there is a serious issue around malnutrition here in the Philippines. We are trying to build a movement of a multitude of stakeholders like corporates, the public, the government, that together we need to fight for more investment in the situation to address malnutrition here in the Philippines,” said Michel Rooijackers, Save the Children’s Deputy Country Director of Operations.

According to the International Food Policy Research Institute (FPRI), the Philippines recorded a score of 20.1 in a Global Hunger Index, which is equivalent to a serious level of hunger in the country. Ranking 51st among the 117 countries tested by the FPRI, the Philippines also posted a chronic malnutrition rate of 26.2 % among children aged 0-2 years old in a survey by the Food and Nutrition Research Institute (FNRI) and the Department of Science and Technology (DOST). 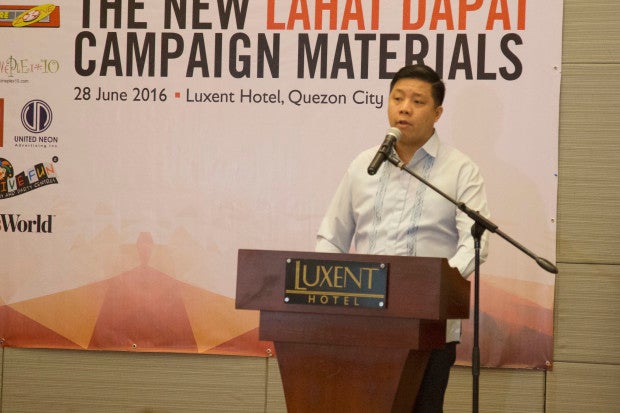 Dr. Anthony Calibo of the Department of Health Central Office urges all government agencies to “act together as one” in addressing the chronic malnutrition cases in the Philippines. Photo courtesy of Save the Children.

Save the Children’s Deputy Country Director also urged the incoming Duterte administration to build a more comprehensive program around malnutrition in order to reverse the effects an increase in the number of malnourished children in the country.

“If the public knows the extent of the problem we believe that there will be enough of a movement, of a drive, to have more investment in the health system and more nutritional supplement so that we can reverse the situation,” added Rooijackers.

Save the Children launched its first Community Management of Acute Malnutrition (CMAM) in Davao City following the effects of the 2008 North Cotabato conflict of the Philippines armed forces and rebels from the Moro Islamic Liberation Front.

“More than half a million families were displaced. What we saw back then was devastating so we introduced CMAM. We trained people and we focused in evacuation areas because the malnourished children were there,” Parawan narrated.

He explained that the nutritionists in Davao City recognized the effectiveness and “scientific approach” of the CMAM and wanted to properly introduce it hopefully with the local government units’ support.

“They approached Mayor Duterte and he liked the idea. He gave a budget and funded the program, so Davao served as a ‘model’ or ‘demonstration area’ of the CMAM,” the advisor said.

Duterte as the ‘face’ of nutrition

Outgoing Department of Health (DOH) secretary Janette Garin had signed an administrative order implementing the CMAM and Parawan said that it is “only a matter of pushing it to the new administration.”

“I’m positive. I know that the new administration can take up [the issue of malnutrition] because Duterte is a child advocate. We’re trying to push Duterte as our champion for nutrition based on what he did in Davao.”

Parawan also hopes that incoming DOH secretary Paulyn Ubial would take on the challenge of “getting our acts together to solve malnutrition.”

Parawan clarified that the CMAM should not only be done during emergency situations. He said that this was the purpose of their first CMAM project in Metro Manila, which launched April.

“Visayas and Mindanao both already experienced actually implementing the CMAM, that’s why we will slowly introduce it in Metro Manila through Navotas […] and hopefully get the government to also support it,” he said.

According to Parawan, budget allocations and food procurement from DOH, and finalization of training modules by the organization are now underway days before the beginning of the next administration. Commodities needed for the CMAM are expected to arrive by September or October.

Save the Children’s Rooijackers also said that they will be supporting the government’s CMAM program which starts in August.

“The first year will predominantly be in Mindanao but we will continue to test and invest with the government in new methodologies and try to make it more familiar for the whole of the country,” added Rooijackers. Meg Adonis and Kurt Lozano, INQUIRER.net trainees/RAM/rga