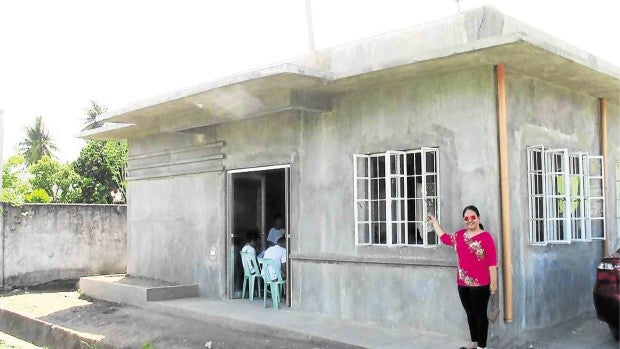 VILLAGE SHELTER A concrete structure that can withstand winds of up to 200 kilometers per hour and accommodate at most 12 families rises in Barangay Ponso in Polangui, Albay province, to serve as evacuation shelter for villagers in times of natural calamities. It also doubles as a temporary classroom. MICHAEL B. JAUCIAN/INQUIRER SOUTHERN LUZON

POLANGUI, Albay—Unlike her family’s past experiences during calamities, 15-year-old Sherry Ollet now has fewer worries after a permanent evacuation center was put up in her village.

“We are grateful and thankful to our local leaders that they came up with a very good project, which prioritizes the welfare of residents,” said Ollet, who lives in Sitio Peñafrancia in Ponso, one of the 44 barangays in Polangui town.

The concrete prototype shelter was under the “Bottom Up Budget” program in partnership with the municipal government, the provincial government and the Department of the Interior and Local Government.

Polangui is one of the catch basins in the third district of Albay. Seventeen of its barangays are prone to flooding while the rest are threatened by landslides during calamities.

“We usually leave during typhoons because we don’t want to get hurt as our house is only made of light materials and often blown away by strong winds,” Ollet said.

With the shelter just a 15-minute walk away from their home, she and her five siblings need not rush to the village chapel to seek protection.

Evacuation centers in every village aim to save lives, Mayor Cherilie Mella-Sampal said. “We want to attain zero casualty in times of calamities,” she said.

Sampal said she also wanted also to ease the burden of schools, which are usually designated shelters for evacuees.

Municipal engineer Lalaine Besa-Baldemoro said the concrete buildings would be able to withstand winds of at least 200 kilometers per hour.

“A center can accommodate up to 10 to 12 families, or 40 to 50 persons,” she said. It is well-ventilated with six glass windows, and has a kitchen and three toilets for males, females and persons with disabilities.

“Water is also not a problem because every unit has its own pump,” Baldemoro said.

The structure is 2.5 feet above the ground to avoid flooding. A second floor may be easily added.

Baldemoro said the centers would also serve as emergency classrooms for public school pupils. In the meantime, these are being used as temporary learning areas by students of Ponso National High School, which is short of classrooms.

Michelle Bayonita, a Grade 8 teacher, said the establishment of the facility was timely for the opening of classes as six additional classrooms were being put up.

Outgoing Gov. Joey Salceda said the shift from large-scale evacuation to town centers to barangay-based evacuation centers would reduce the need to move military assets, particularly trucks. “With this, we speed up the process of evacuation and decampment, and thus reduce cost and inconvenience,” he said.