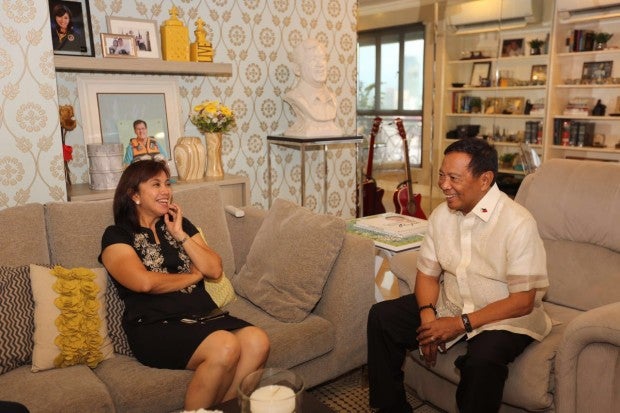 PHOTO FROM OFFICE OF THE VICE PRESIDENT

THE incoming and outgoing Vice President met for the first time two days before Leni Robredo will be sworn in as the second highest government official on June 30.

Defeated presidential candidate Jejomar Binay visited Robredo at her home in Quezon City on Monday, a media release from the Office of the Vice President said.

The meeting coincided with the 29th wedding anniversary of Leni and her late husband and former Interior Secretary Jesse.

And what was his advice to the new Vice President?

In the photos sent by the OVP, it showed Robredo and Binay laughing and casually talking while sitting on the sofa.

Since Robredo was celebrating their wedding anniversary, she asked Binay to share bihon, bicol express and gulay na santol with her.

During the meeting, Robredo took the opportunity to thank Binay for leaving the budget for the Office of the Vice President this year intact.

Seeking advice from her predecessor, Robredo asked Binay if the budget was enough to accommodate all the people asking for medical assistance.

Binay said to her: “You should always consider your office a public office and that people will go to you for assistance.”

Robredo and Binay campaigned under opposing parties. Both Binay and his political nemesis Mar Roxas vied for presidency. Roxas ran alongside Robredo under the erstwhile ruling Liberal Party.

Robredo shunned the idea of holding office in what she called the “ostentatious” Coconut Palace where Binay stayed throughout his term.

But she shared Binay that she intentionally did not visit the palace because she was afraid she would be tempted to stay there despite the expensive rental fee of almost P500,000 per month.

QC Vice Mayor Joy Belmonte said the rental fee of the QC Reception House will be less than half of what Binay is paying for his stay at Coconut Palace.