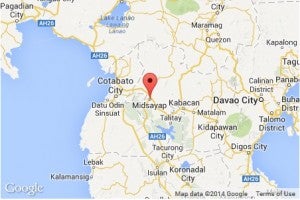 COTABATO CITY – Two suspects in the roadside bombing in Midsayap, North Cotabato, last week have been arrested by soldiers manning a checkpoint in a remote village in that town on Sunday.

Supt. Tom Tuzon, Midsayap town police chief, identified the suspects as Lahmudin Ampuan, 21, and Adzal Bobby Dansulaw, 56, both residents of the Datu Abdullah Sangki town in Maguindanao. The two were turned over by the Army to the Midsayap policeon Sunday, for the filing of charges.

They were arrested at a checkpoint by elements of the 62nd Reconnaissance Company of the 6th Infantry Division in Barangay Salunayan in Midsayap.

Tuzon said the soldiers recovered a home-made sub-machine gun and two live fragmentation grenades. The suspects could not explain why they were carrying explosives in coming to the town proper of Midsayap, a town that borders North Cotabato and Maguindanao.

During tactical investigation, the two allegedly admitted they were members of the Bangsamoro Islamic Armed Forces (BIAF), the military arm of Moro Islamic Liberation Front and showed identification cards to Army investigators.

Three soldiers and a student were hurt when a powerful improvised explosive device was set off near Ulandang National High School in Barangay Ulandang, Midsayap, while a military truck was passing by.

But Dansulaw denied they were behind the bombing.

He also told reporters they did not own the two fragmentation grenades, but admitted ownership of a home-made submachine gun pistol. “For self-defense only,” he said when asked why he owned a gun.

Benito reminded authorities in Midsayap that any confession taken out of coercion or compulsion through torture, and in the absence of a counsel, would not be valid a statement to prosecute any crime with.

He said the victims were fasting on the 21st day of Ramadan, and that while they were being interrogated at gunpoint, they were forced by their soldier-captors to eat a handful of chilly pepper.

Capt. Jo-Ann Petinglay, 6th Infantry Division spokesperson, vowed she would check on the report of torture.