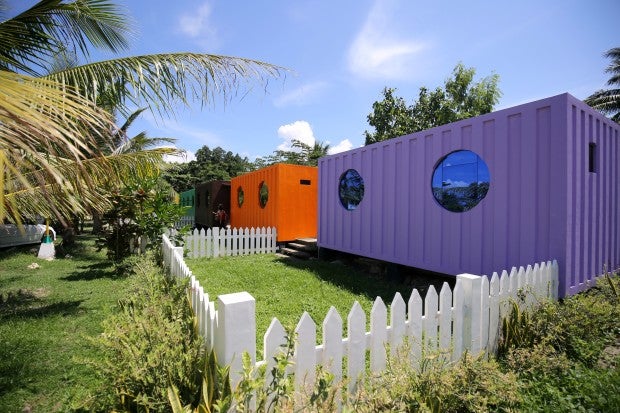 EIGHT concrete structures, looking like shipping containers, rise near the Mulanay port to serve as inns for visitors to the town. DELFIN T.MALLARI JR./INQUIRER SOUTHERN LUZON

MULANAY, Quezon—Eight concrete structures in purple, green and orange dot the coastline of Tayabas Bay in this town 272 kilometers southeast of Metro Manila.

The structures, looking like shipping containers, are just a stone’s throw from the unfinished Mulanay port and are operated by the local government unit as inns for visitors.

They were built in 2001 to address the need for sleeping quarters of guests.

Mulanay Mayor Joselito Ojeda said the local government often entertains guests but has no lodging facility for them.

Most visitors are foreigners from international funding agencies that are helping in projects in the town.

According to Ojeda, the official guests often end up sleeping in vacant offices in the town hall. Sometimes, they sleep in local government officials’ houses, said the mayor.

In some cases, the local government billets official guests in a hotel in Catanauan town, 14 km from Mulanay where three hotels have since been built.

Ojeda said the local government “found the arrangement discomforting” for its guests. “We really feel sorry,” the mayor said.

The local government, he said, found inspiration in the trend of using shipping containers as lodging facilities.

A feasibility study brought local officials to Cebu and other places where shipping containers have been transformed into homes or lodging facilities.

Mulanay officials found that hauling shipping containers could be too costly. Ojeda said it would cost at least P70,000 to transport one container.

“We’re apprehensive that it would not last long,” said Ojeda.

Sanny Cortez, Mulanay tourism officer, said Ojeda himself prepared the design for the concrete structures that look like containers.

“First time guests end up touching their walls,” said Cortez. “They were all fascinated to learn that the units were not really shipping containers but concrete,” he said.

The local government, he said, built the structures one at a time. Each unit has a floor area of 24 square meters, wider than a regular container.

Air-conditioning units are fitted in each of the structures. Each structure has amenities like those in a hotel.

The operation of the “container houses” is managed by the municipal tourism office, which charges P1,500 per overnight stay for a group of four.

Aside from official guests of the local government unit, tourists are also welcome to check in at the container inns.

The scenes outside the structures are tourism-worthy—sunsets in the afternoon and bright moonlight at night.

The town boasts of an unpolluted beach and tourist spots like the limestone Mt. Kamhantik, a 1,000-year-old village and an ancient burial ground.

The local government plans to turn parts of Mt. Kamhantik into a theme park with a museum to show the rich and colorful cultural heritage of the town.

Environmental advocates are drawn to the town by lush mangrove areas./rga