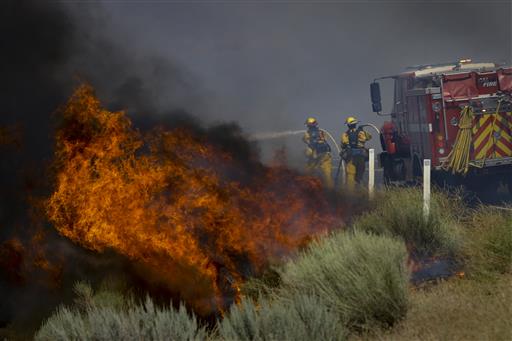 Firefighters battle a wildfire burning along Highway 178 near Lake Isabella, Calif., Friday, June 24, 2016. The wildfire that roared across dry brush and trees in the mountains of central California gave residents little time to flee as flames burned homes to the ground, propane tanks exploded and smoke obscured the path to safety. AP Photo

LOS ANGELES—At least two people have died in a fire in central California that has destroyed 100 structures and prompted the governor to declare a state of emergency, officials said Friday.

The fast-moving blaze that erupted late Thursday afternoon in the Lake Isabella area of Kern County had spread to about 30,000 acres (121 square kilometers) by Friday afternoon and was five percent contained, authorities said

The Kern County Fire Department confirmed the two fatalities in a message on Twitter but provided no further details.

It said firefighters were dealing with strong winds that were fanning the so-called Erskine fire — located three hours north of Los Angeles.

Governor Jerry Brown issued a state of emergency for the region, allowing aid to be deployed more quickly.

“Anne and I extend our heartfelt sympathies to everyone impacted by this destructive blaze,” the governor said in a statement, referring to his wife.

“We join all Californians in expressing our gratitude to the courageous firefighters, emergency personnel and volunteers working tirelessly throughout Kern County to help residents and extinguish this fire.”

Local media said 80 homes had been destroyed by the flames, which quickly went out of control and that number was likely to grow.

Thousands of residents have also been evacuated.

“This fire … it exploded. It went from 2 to thousands of acres within hours,” county fire captain Tyler Townsend told reporters.

Fire officials said some 800 firefighters were battling the blaze and several hundred more were on the way.

“Our firefighters … have been engaged in a firefight of epic proportions, trying to save every structure possible.”

Authorities closed several highways and evacuated two schools and a retirement home in the agricultural and oil region after the blaze started due to unknown causes.

California is experiencing a record five-year drought and trees and brush are at risk of igniting from the smallest spark.

Temperatures that climbed to more than 100 degrees Fahrenheit (40 degrees Celsius) earlier this week increased the risk of fire.

More than 14 large fires are currently raging in the United States, mostly in the southwest, where a record heat wave left at least five dead last Sunday.