Flor freed as Duterte vows to get Abus

Her captors roused Marites Flor before dawn, and ordered her to pack up, telling her, “You are going home.”

Flor, held hostage for nine months by the notorious bandit group Abu Sayyaf in strife-torn Mindanao, was released from captivity in Sulu on Friday, a week after her Canadian boyfriend was beheaded by the gunmen.

Flor’s partner, Robert Hall, was beheaded after a ransom deadline lapsed last week, following a similar killing of the other Canadian hostage, John Ridsdel, in April.

President-elect Rodrigo Duterte, who will take his oath of office on Thursday next week, said the time would come when he would have to confront the Abu Sayyaf.

“There will be a time that I will have to confront the Abu Sayyaf,” Duterte said after meeting Flor. “The kidnapping must stop.”

Officials maintained that no ransom was paid, but a source said the Abu Sayyaf received P20 million to release Flor.

“We affirm the position taken by the AFP (Armed Forces of the Philippines) in welcoming the release of Ms Marites Flor and reiterating its firm determination to continue ongoing operations to bring about the safe return of all remaining hostages,” Coloma said.

Brig. Gen. Restituto Padilla, spokesperson for the AFP, said the safe release of the other captives remained a “vital objective of continuing military and law enforcement operations” against the Abu Sayyaf.

Flor was freed in Sulu, a southern archipelago known as a hideout of the bandits, the local police chief, Wilfredo Cayat, told Agence France-Presse.

Cayat did not give details on the circumstances of her release except that she was dropped off outside the house of local politician Abdusakur Tan on Jolo, the main island in Sulu. 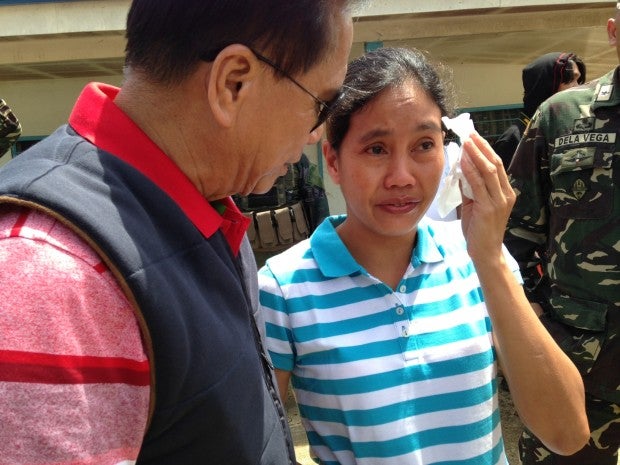 MARITESS FLOR / JUNE 24, 2016
Marites Flor in stripes is picked up by Secretary Jesus Dureza at the Jolo Airport and immediately brought to Davao City to present to incoming President Rodrigo Duterte.
POOL PHOTO

Jesus Dureza, a politician from the area and incoming presidential adviser on the peace process, told Agence France-Presse he negotiated with the kidnappers on behalf of Duterte to win Flor’s release.

“She told me her captors roused her at dawn and ordered her to pack up, telling her, ‘You are going home,’” Dureza added.

Dureza later accompanied Flor on a private jet to the southern city of Davao for a meeting with Duterte.

Later talking with reporters in Davao City, Dureza said no direct negotiations took place between the Abu Sayyaf and the incoming administration.

“There was no negotiation in the sense that we did not get people to talk [with them]. But [Gov.] Sakur Tan helped,” he said.

Dureza said no money was given in exchange for Flor’s release.

A source said an Abu Sayyaf group under a certain Mujer Yadah got P20 million to release Flor and turn her over to Tan.

Dureza insisted no ransom was paid and attributed the release of Flor to his and Duterte’s common friends. He did not identify who these were.

Flor told reporters she had no idea she would be freed anytime. When they removed her blindfold on Thursday for the first time in weeks, they never told her she would be released.

“I didn’t know I was to be freed,” she said. “I wanted to thank Sir Dureza, Sakur Tan, and especially the newly elected President Duterte.”

Flor’s mother, Flordeliza, said that while her family was happy about her release, they grieved over the death of Hall.

Flordeliza credited Duterte for the release of Flor. “We would like to extend our gratitude to Mayor (Duterte),” said Flordeliza. “It is sad that he was not in office (as President) yet when Hall was killed,” she said.

Dureza said Flor would be taken home to Bukidnon so she could be  reunited with her family.

The fate of Norwegian hostage Kjartan Sekkingstad, who was abducted along with Flor and the Canadians, remained unknown.

The four were seized in September from yachts at a tourist resort on Samal Island, about 500 kilometers  to the west of Sulu. Reports from Nikko Dizon, Julie Aurelio in Manila; Karlos Manlupig and Julie Alipala, Inquirer Mindanao; and AFP