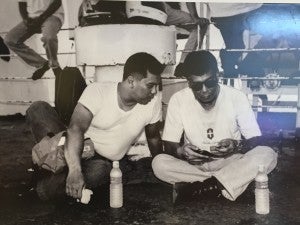 Davao City Mayor Rodrigo Duterte in a chat with a friend. (INQUIRER.NET’S Nestor Corrales took this photograph of Rene Lumawag’s original photo as exhibited in Abreeza Mall on June 23, 2016)

DAVAO CITY – Veteran photojournalist Rene Lumawag, who has been taking photographs of President-elect Rodrigo Duterte for two decades now, said on Thursday that his visual collection showed the tough and gentle sides of the mayor who would become the first President from Mindanao.

Lumawag opened his exhibit at the Abreeza Mall here on Thursday, showcasing some of the photos – mostly in black and white – snapped over the years.

Lumawag, also a former Inquirer photo correspondent, said the photos gave off contrasting impressions of the incoming President, the Davao City’s mayor for 23 years, known for his blunt way of speaking and his hardline stance against crime.

Also present at the unveiling of exhibit were Lumawag’s friends from the Camera Club of Davao, his close associates, and local and national journalists.  SFM