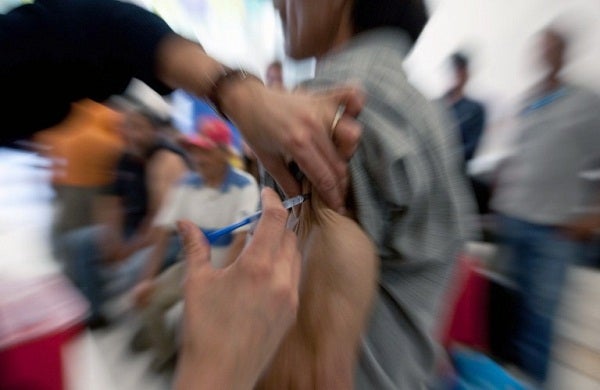 A man in Mexico gets vaccinated for swine flu or H1N1. Down south in Brazil the disease has reportedly made a resurgence and has killed more than 1,000 people since January. AFP FILE PHOTO

RIO DE JANEIRO, Brazil — Amid economic woes, political crisis and a Zika outbreak, Brazil’s health minister on Wednesday announced yet another concern — a resurgence of swine flu that has killed more than 1,000 people since the start of the year.

That number is the most fatalities linked to the disease in Brazil since 2009, when 2,060 people died.

Government health officials said they have recorded 5,214 total swine flu cases between January 3 and June 11 of this year.

More people tend to fall victim to the disease in May and June, when the weather starts to get cooler. The uptick began earlier than usual this year, catching health authorities off-guard.

“As soon as we began to distribute the vaccine, cases have decreased,” Rosenthal noted.

The virus has affected nearly all of Brazil’s 27 states, but is particularly concentrated in the southeast region, where 2,606 infections and 540 deaths have been reported.

The majority of those cases have come from the Sao Paulo region, Brazil’s political and economic epicenter, where 2,197 cases have been recorded, 434 of them fatal.

Rio de Janeiro, where the Olympics will be held from August 5-21, has recorded 150 cases and 44 deaths linked to the virus.

The rise in swine flu cases is another blow to the South American country already dealing with a Zika virus epidemic, an illness transmitted by the Aedes aegypti mosquito with symptoms similar to dengue.

Zika is of particular concern because it can cause infected pregnant women to bear children with microcephaly, a birth defect that causes abnormally small heads and deformed brains.

As of June 18, Brazil has registered 1,616 microcephaly cases. Authorities do not anticipate the epidemic will affect the half a million tourists expected to attend the Olympics because temperatures are expected to cool.

The world’s fourth-ranked golfer Rory McIlory of Northern Ireland announced Wednesday he would not compete in Rio for fear of contracting Zika virus.