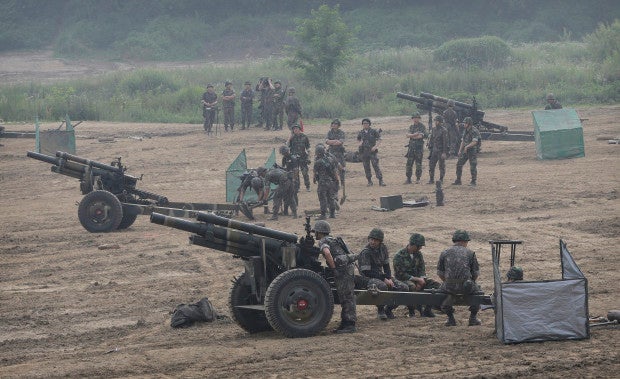 South Korean army soldiers prepare to fire 105 mm howitzers during an exercise in Paju, South Korea, near the border with North Korea on June 22. In a remarkable show of persistence, North Korea on Wednesday fired two suspected powerful new Musudan mid-range missiles, US and South Korean military officials said, but at least one of the launches apparently failed, Pyongyang’s fifth such reported flop since April. AP

SEOUL, South Korea—North Korea took a significant step Wednesday in the development of a powerful ballistic missile intended to reach US bases in the Pacific, launching one of the weapons about 1,000 kilometers (620 miles) high after five failed attempts in recent months.

The North’s suspected Musudan tests worry Washington and its allies, Tokyo and Seoul, because the missile’s potential 3,500-kilometer (2,180-mile) range puts much of Asia and the Pacific, including US military bases there, within reach.

Japanese Defense Minister Gen Nakatani said the most recent launch demonstrated a “certain level of capability,” and could lead to a further strengthening of North Korea’s ballistic missile capabilities that can cover Japanese territory.

Each new test — apparently linked to a command from North Korean leader Kim Jong Un — likely provides valuable insights to the North’s scientists and military officials as they push toward their goal of a nuclear and missile program that can threaten the US mainland. Pyongyang earlier this year conducted a nuclear test, its fourth, and launched a long-range rocket that outsiders say was a cover for a test of banned missile technology.

A statement from South Korea’s Joint Chiefs of Staff said a suspected first Musudan launch from the east coast city of Wonsan failed. It didn’t elaborate, but Japan’s Defense Ministry said the missile fragmented and pieces fell into waters off the Korean Peninsula’s east coast.

Later Wednesday, the South’s military said the North fired another suspected Musudan, which flew about 400 kilometers (245 miles). Seoul didn’t immediately classify this launch as either a success or failure.

Japan’s Defense Ministry said that its radar analysis found that the missile reached an altitude exceeding 1,000 kilometers (620 miles), which suggests it was a Musudan missile.

“We have to see it as a success,” Lee Choon Geun, an analyst at South Korea’s state-funded Science and Technology Policy Institute, said of the second launch. “No other (previous) missiles fired by North Korea have ever flown that high.”

The US Strategic Command in Hawaii said its systems detected and tracked two suspected North Korean Musudan missiles that fell into the Sea of Japan. They didn’t pose a threat to North America, it said.

Before April’s launches, North Korea had never flight-tested a Musudan missile, although one was displayed during a military parade in 2010 in Pyongyang.

The launches appear to stem from Kim Jong Un’s order in March for more nuclear and ballistic missile tests. The order was an apparent response to springtime US-South Korean military drills, which North Korea views as an invasion rehearsal.

Since the end of those military drills, Pyongyang has repeatedly called for the resumption of talks with Seoul, even as it pursues new missile development, but the South has rejected the overtures. Seoul wants the North to first take steps toward nuclear disarmament. Pyongyang says its rivals must negotiate with it as an established nuclear power, something Washington and Seoul refuse to do.

The string of recent launch attempts shows the North is pushing hard to upgrade its missile capability in defiance of US-led international pressure. The North was slapped with the strongest UN sanctions in two decades after its nuclear test and long-range rocket launch earlier this year.

“These provocations only serve to increase the international community’s resolve to counter (North Korea’s) prohibited activities, including through implementing existing UN Security Council sanctions,” State Department spokesman John Kirby said. “We intend to raise our concerns at the UN to bolster international resolve in holding (North Korea) accountable for these provocative actions.”

Chinese Foreign Ministry spokesperson Hua Chunying said that Beijing didn’t consider the missile launches to be an act of defiance against China, North Korea’s long-time ally with whom its relations have cooled substantially in recent years.

“To say such an act taken by North Korea shows disapproval against China is reading too much into it,” Hua said at a press briefing.

North Korea has recently claimed a series of breakthroughs in its push to build a long-range nuclear missile that can strike the American mainland. But South Korean officials have said the North doesn’t yet possess such a weapon.

The North, however, has already deployed a variety of missiles that can reach most targets in South Korea and Japan, including American military bases in the countries.

The Korean Peninsula remains in a technical state of war because the 1950-53 Korean War ended with an armistice, not a peace treaty. About 28,500 US soldiers are stationed in South Korea to deter possible aggression from North Korea; tens of thousands more are stationed in Japan.