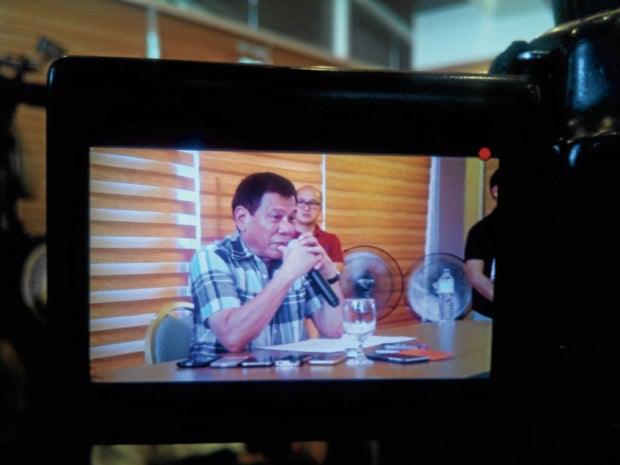 In this May 16, 2016 file photo, President-elect Rodrigo Duterte’s press conference is shown live by a television station.  After shutting out mainstream broadcast networks, broadsheets and major news websites from his press briefings, limiting coverage to the state-owned PTV-4, Duterte has decided to give TV networks access to his June 30 inauguration so they could broadcast the event live.  PHOTO BY BARRY OHAYLAN / CONTRIBUTOR

DAVAO CITY – President-elect Rodrigo Duterte has approved the request of broadcast networks for access to his June 30 inauguration so that they could broadcast the historic event live, the incoming presidential communications secretary Martin Andanar said on Wednesday.

Andanar told reporters here that broadcast companies would be allowed to cover the event from a “strategic space” on the grounds of Malacañang.

“After serious consideration, the organizing committee of the Inauguration 2016 has decided to approve the request of the national broadcasting companies to have a strategic space on Malacañang grounds,” Andanar said.

Andanar said that journalists could do their stand-uppers near Gate 6 during the inauguration inside the Rizal Hall.

He said Duterte’s inaugural speech was being finalized as of Wednesday.

“The President has full editorial control of his speech,” Andanar said.

He said in jest there would be no expletives, for which Duterte had been previously criticized during his extemporaneous speeches.  Andanar added the new President might use a mix of English, Filipino and Cebuano.

And for a person used to doing unscripted speeches, Duterte might use a teleprompter for his inauguration.

Andanar said that a couple of weeks ago, they asked RTVM to send in a teleprompter.

“He liked it. He liked the teleprompter,” Andanar said.

“We had a meeting with the representative of Facebook Asia and they offered to live stream the inauguration. It can be easily accessed especially by OFWs (overseas Filipino workers) and Filipinos all over the world,” Abella said.

As promised, the inauguration will be brief and the usual rites – including the salubong between Duterte and outgoing President Aquino will be “edited and shortened” to an estimated duration of five hours.

Incoming Vice President Leni Robredo’s presence in the President’s inauguration had not been considered, said Andanar and Abella.

There will be no partying too and that the incoming President decided to do away with the traditional vin d’honneur.

“There will be no champagne popping, no caviar, no blue cheese,” Andanar said.

Instead, a diplomatic reception will be held but the types food to be served were not divulged by Andanar and Abella.

After the inauguration, Duterte will administer the mass oath taking of Cabinet members, to be followed by a meeting with the diplomatic corps.

Regarding the incoming First Family, it is not year clear who will be standing beside Duterte but both Andanar and Abella have confirmed that people close to Duterte, including his children Sara, Paolo, Sebastian and Veronica, will be there.

Members of his Cabinet and councilors of Davao City were also invited but were strictly advised not to bring their spouses.

Abella and Andanar asserted that Duterte, a simple man all his life, would fulfill his pronouncements that nothing fancy would be served in the inauguration.

Meanwhile, LED screens will be mounted in Davao City so that the residents will be able to monitor live the inauguration of Duterte.  SFM