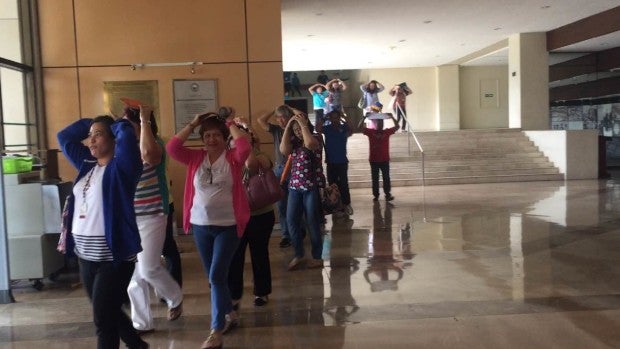 Employees of the House of Representatives file out of the Batasang Pambansa building in this year’s Metro Manila shake drill. MARC JAYSON CAYABYAB / INQUIRER.NET

Only a few dozen employees in the House of Representatives on Wednesday participated in this year’s Metro Manila earthquake drill, meant to simulate the scenario of a 7.2 magnitude earthquake.

The bell sounded around 9 a.m. but only a few employees came out of their offices doing the “duck, cover, hold” and trooped to the lawn that served as a make-shift evacuation center outside the plenary hall.

READ: Metro Manila, nearby provinces brace for ‘big one’ with shake drill

Unlike the quake drill last year when employees pretended to be representatives evacuating from the plenary, this year’s quake drill did not have a scenario for employees to participate in.

There were also no medic and rescue workers, and no employees pretending to be hurt and dead during the drill.

No ambulances and stretchers were available during the drill. Instead, the employees were given emergency kits that contained food, water, and a whistle.

The employees were also seen laughing as they imitated the duck, cover and hold posture.

The entire drill lasted only about 10 minutes.

In last year’s quake drill, at least eight lawmakers and 12 others “died” in the disaster scenario that lasted from 10:30 a.m. to 11:30 a.m., according to the House Secretary General Marilyn Barua-Yap.

The drill last year also simulated an earthquake scenario, complete with medic, rescue workers, and equipment to “rescue” employees who pretended to be hurt or dead.

Yap earlier said she was looking at conducting another quake drill, this time involving elderly representatives who might find a hard time evacuating in case of an earthquake.

No representatives participated in the quake drill.