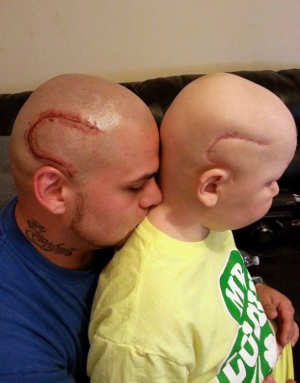 A father from Kansas, United States, had his head shaved and tattooed, similar to his son’s cancer surgery scar just to boost the latter’s confidence. This won for him the best dad title in a  competition, as well as endeared him to netizens.

John Marshall, 28, thought of boosting the confidence of his eight-year-old son, Gabriel, after the young boy underwent surgery in March 2015. Gabriel had been diagnosed with a malignant and cancerous brain tumor called anaplastic astrocytoma. A series of surgeries made him bald and created a line scar on the head above his right ear.

In an interview with ABC News, Marshall said, “My son was very self-conscious after he got his surgery. He felt like a monster.”

The duo received an outburst of kudos after he won first place in the Best Bald Dad competition by St. Baldrick’s Foundation, held this month. The aim of the contest is to honor fathers who shaved their heads for their children combating cancer. Marshall got 5,000 votes for the father-and-son portrait captioned, “Me and my son at this year’s St. Baldrick’s event in Wichita, Kansas. Got my son’s scar tattooed to help his self-confidence.”

“I never intended for it to be this big,” he spoke to ABC News after his win. “It was just a friendly competition between fellow cancer dads and people showing support for their loved ones who have fought cancer.”

Read Next
Dutch dumps case against man who ‘fought jihadists’
EDITORS' PICK
Geek out at TOYCON 2022 powered by Smart Signature
UK’s Boris Johnson will resign, BBC reports
High inflation: Your P1 is now worth only 87 centavos
High-risk pregnancy: Reducing your risk is in your hands
Unemployment rate up to 6% in May
House energy committee chair Arroyo bats for cheap electricity
MOST READ
Suspect in grisly killing of missing woman in Bulacan arrested
Kim Atienza’s daughter flaunts bikini body in response to critics of her ‘revealing photos’
Cop slain in Isabela ambush
FDA probes popular Filipino noodle brand for ‘high level of ethylene oxide’
Don't miss out on the latest news and information.