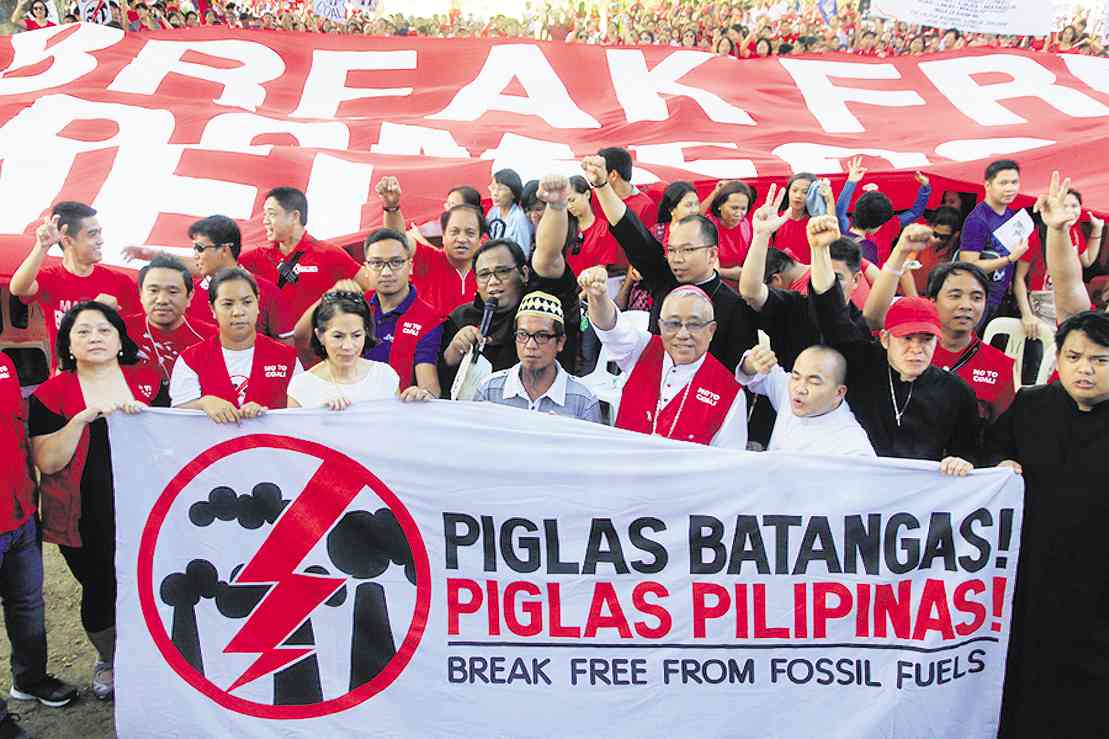 ANTICOAL green advocates march in Batangas City, where a 600-megawatt coal-fired power plant is being proposed, to demand to the incoming Duterte administration the cancellation of all proposed coal plants nationwide and the hastening of the country’s transition to renewable energy. JIMMY A. DOMINGO/GREENPEACE

BATANGAS CITY—Environmental groups promoting the preservation of the biodiversity-rich Verde Island Passage suffered a double blow after losing their bids to stop a coal-fired power plant and a large-scale mining project in Batangas province.

On Monday, the city council approved the issuance of a zoning or locational clearance that allows the construction of a 600-megawatt coal-fired power plant in Barangay Pinamukan Ibaba here.

JG Summit, the holdings company of the Gokongwei Group, applied for a permit to build the coal plant on Jan. 22 last year on a 50-hectare lot inside the city’s heavy industrial zone.

Once operational, this would be the third coal-fired power plant in the province. The others are the plant operated by DMCI Power Corp. in Calaca town and a coal storage facility in Ibaan town—the biggest in the country so far.

Dela Roca chairs the committee on environment and urban planning, land use and zoning.

“After the conduct of investigation and necessary hearings, it was proven that the application for zoning/local clearance has no legal impediment,” the resolution read.

“I am saddened, but our fight doesn’t end here,” Councilor Kristine Balmes, one of the four councilors who voted against the resolution, said in a phone interview. She said she had yet to secure an environmental compliance certificate from the Department of Environment and Natural Resources.

The city government also required the company to meet certain conditions, among them the installation of pollution control facilities, a safe ash pond that prevents leachate and an online emission monitoring system accessible to the government.

It also prescribed that the company to protect the Pinamucan River during its project development.

In the next town of Lobo, residents and members of the Catholic Church also lost in their bid to pass an ordinance that will “totally ban” mining there.

“It was like a double black eye for us,” Fr. Dakila Ramos, head of the Environment Ministry of the Lipa Archdiocese, said in a separate interview on Tuesday.

Groups are opposing the application of the Canadian-Australian-owned Egerton Gold Philippines Inc. and Mindoro Resource Ltd. to mine more than 20,000 ha in the coastal village of Balibago. The company, whose 10-year exploration permit expired in 2012, is now seeking a permit to begin gold extraction in Mt. Lobo.

Also on Monday, the municipal council junked on third reading a proposed ordinance to declare the town mining-free.

“We will file a motion for reconsideration,” Ramos said.

The coal plant and mining projects are feared to cause massive environmental degradation as these are located close to the Verde Island Passage, which is known as the world’s center of marine biodiversity.

A series of big rallies, the latest held in May to drum up global climate action, were held to oppose the projects that threaten key biodiversity areas.

“The science is clear, hence countries adapted the Paris Agreement to address the cause and ill effects of the climate crisis,” said Rodne Galicha, Philippine manager of Climate Reality Project, in an e-mail.

He said local legislators should be reminded of the country’s global commitment to “significantly and conditionally reduce carbon emissions by 70 percent by the year 2030.”