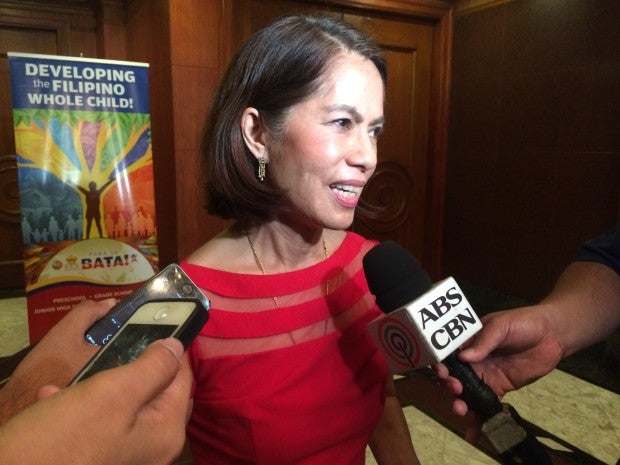 Environment advocate Gina Lopez on Tuesday accepted President-elect Rodrigo Duterte’s offer for her to become the next environment secretary.

“After much introspection, I decided to accept it (environment portfolio). Let’s see what happens,” Lopez told reporters a few minutes after talking to Duterte over the phone at the sidelines of the 4th Excellence in Educational Transformation Awards held at the ABS-CBN compound in Quezon City late Tuesday afternoon.

Asked what she told Duterte a day after she was offered to head the Department of Environment and Natural Resources (DENR), Lopez said she told the incoming President: “I’m deeply honored since it’s a controversial decision; that you have decided to trust me. I give you my firm commitment that I will do everything that I can and it’s not only to protect the environment [but also] to eradicate poverty.”

Lopez, who described herself as “not the usual choice” for environment secretary because of her antimining stance, said she was open to meeting promining advocates for her to give her “suggestions” on how to address concerns in the industry.

“We cannot and we must not build an economy based on suffering,” she said, pointing out that farmers and fishermen were at the losing end of mining activities in the country.

Lopez also expressed her opposition to coal-powered plants, saying these were not cheap sources of energy because these compromised the health and income of its host community.

“The poor are suffering so that they (companies) can make money,” she said.

She pointed out the case of Semirara Mining and Power Corp., which she branded as a “nightmare” because “seaweed farmers are suffering.”

Instead, Lopez said the government should focus its efforts on the development of renewable resources, such as solar and wind.

Lopez also issued a stern warning against corrupt officials at the DENR, who she said had been instrumental in the deterioration of the environment.

“We’ll clean the ranks of DENR. Those accepting bribes, your days are over. Stop it. No corruption is acceptable,” she said.

She added that she is also eyeing to partner with the Department of Transportation and Communications to ensure cleaner air, especially in the Metro.

Lopez said she was certain that by protecting the environment, the country “can eradicate poverty.” She noted that she had been able to do this in various communities her group had partnered with over the last few years.

Currently, Lopez is the chair of the Pasig River Rehabilitation Commission (PRRC). She said that she would want to keep her position in the agency working on the reviving the Pasig River since to her knowledge, environment secretaries in the past have headed the PRRC. With a report from Arianne Cardiño