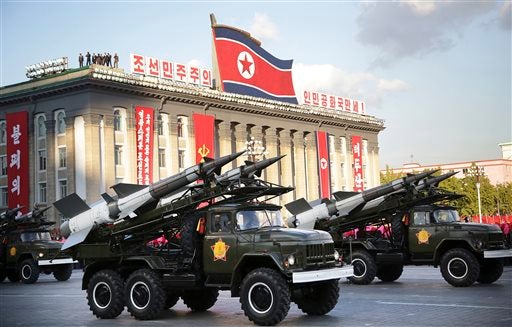 In this Saturday, Oct. 10, 2015, photo, missiles are paraded in Pyongyang, North Korea during the 70th anniversary celebrations of its ruling party’s creation. With tensions high and the United States and South Korea preparing to hold their massive annual wargames, Pyongyang is warning it will respond to any violations of its territory with merciless retaliation, including strikes on Seoul and the U.S. mainland itself. AP

The isolated state apparently failed with an attempted launch at the end of May, which marked the most recent in a series of setbacks for its ballistic weapons programme.

But the country, which has been regularly condemned and sanctioned by the United Nations for missile and nuclear tests, has shown no signs of giving up on a weapons programme whose ultimate goal is to develop a nuclear weapon that could target the US mainland.

Japanese media, including Kyodo News agency and public broadcaster NHK, cited unidentified sources as saying signs have been detected of a possible launch.

Kyodo said Japan’s military had been ordered to intercept any missile or falling parts that might threaten Japanese territory.

North Korean missile or rocket launches have flown over Japanese territory in the past, and the government has deployed anti-missile batteries in Tokyo and other parts of the country in response.

Defence officials in Tokyo said they could not comment, citing the sensitivity of the matter, but did not deny the reports.

The three failures were seen as an embarrassment for the Pyongyang leadership, coming ahead of a rare ruling party congress in May that was meant to celebrate the country’s achievements.