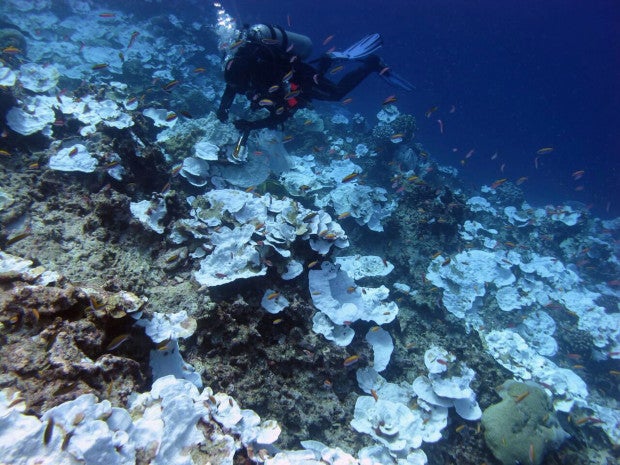 This May 2016 photo provided by NOAA shows bleaching and some dead coral around Jarvis Island, which is part of the U.S. Pacific Remote Marine National Monument. Scientists found 95 percent of the coral is dead in what had been one of the worlds most lush and isolated tropical marine reserve. More than 2,000 international reef scientists, policymakers and stakeholders are gathering in Hawaii starting Monday, June 20, 2016, to discuss the latest coral science and what can be done to stop widespread death of the world’s reefs. AP

WASHINGTON, United States — The planet’s coral reefs are likely facing warmer than normal water for an unprecedented third year in a row, extending what is already the longest coral bleaching event on record, US observers said Monday.

The global bleaching event began in mid-2014 with global warming and a particularly intense El Nino phenomenon resulting in higher than normal ocean temperatures, according to the National Oceanographic and Atmospheric Administration.

NOAA presented its grim outlook for the world’s coral reefs at an international symposium being held this week in Honolulu, Hawaii.

It said the impact is expected to be particularly hard on reefs in US states and territories.

Reefs in Hawaii, Guam, the Northern Marianas, the Florida Keys, the US Virgin Islands and Puerto Rico are particularly vulnerable.

“Since its onset, all US coral reefs have seen above normal temperatures and more than 70 percent of them have been exposed to the prolonged high temperatures that can cause bleaching,” NOAA said.

It noted that studies also have shown that about 93 percent of Australia’s Great Barrier Reef was bleached as of April.

Moreover, there is a 90 percent chance of widespread coral bleaching in the Pacific island states of Palau and Micronesia during an impending La Nina phenomenon, which can cause high ocean temperatures in the western Pacific.

“It’s time to shift this conversation to what can be done to conserve these amazing organisms in the face of this unprecedented global bleaching event,” Jennifer Koss, the director of NOAA’s coral reef conservation program.

She said local conservation efforts have proved inadequate, and that a greater global effort was needed to respond to the effects of climate change.

Corals are nourished by microscopic algae, called dinoflagellates, that live in vast colonies on their surface.

The algae consume nitrogen, phosphorus and other nutrients derived from the coral, and use light to transform those substances into energy.

The photosynthesis also liberates energy in the coral’s tissues, enabling it to build the calcium skeletons that provide a habitat for these unicellular algae.

When the coral is under stress, it sheds the dinoflagellates and whitens.

The disappearance of coral reefs has had a big impact on the marine ecosystem because they provide food and shelter for many species of fish and crustaceans.