CEBU CITY—Local officials are seeking to prevent the departure from the country of a cargo vessel that damaged at least three hectares of coral reefs in a popular diving spot off a northern town in Cebu province until the ship’s owners have paid for the damage.

The MV Belle Rose has been removed from Monad Shoal eight days after it ran aground in shallow waters off Daanbantayan town.

Workers pulled the ship to deeper seas to refloat it.

Baltazar Tribunalo, head of the Provincial Disaster Risk Reduction and Management Office (PDRRMO), said the owner of Belle Rose should write a letter committing to pay for the damage that the ship caused on coral reefs that are frequented by thresher sharks.

He said, though, that representatives of the shipping firm assured provincial and municipal officials that they would pay.

To be able to demand payment, authorities should first have the damage assessed, said Tribunalo.

A rehabilitation plan should also be drafted after the assessment.

Belle Rose was refloated past 10 a.m. on Monday after three tugboats owned by Malayan Towage and Salvaging Corp. were finally able to pull it to deeper waters.

Noel Kimmayong, marine superintendent of Malayan, said the ship was pulled 100 meters from where it ran aground while it was on its way to the southern town of San Fernando, Cebu province to deliver its cargo of 43,000 bags of clinker, a raw material for the production of cement.

The ship’s port of origin is in Japan.

The operation to remove the vessel from Monad Shoal started on Saturday during high tide. 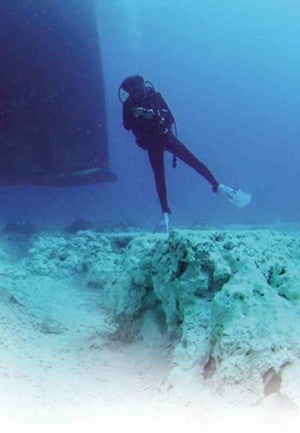 A DIVER checks the damage to corals caused by the cargo ship MV Belle Rose which ran aground on its way to deliver a cargo of cement manufacturing materials. FERDINAND EDRALIN/CEBU DAILY NEWS

He said the vessel was towed by the tugboats to San Fernando to deliver its cargo to a cement factory and where it would stay anchored.

Local environment officials earlier said at least three hectares of the 300-hectare Manod Shoal were damaged when the vessel ran aground.

Experts said the cost of repairing the reefs, through transplant, could reach P1.4 million.

He said corals grow at an average of three centimeters per year depending on water current and quality.