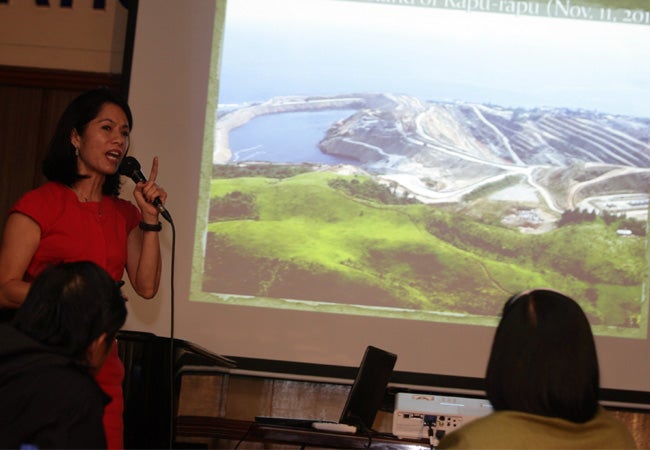 In a statement, the Kalikasan People’s Network for the Environment (Kalikasan PNE) praised Duterte for offering Lopez the post, describing here as more than capable of leading the agency.

The group said Lopez was instrumental in gathering at least 10 million signatures in the “No to Mining in Palawan” campaign.

“We linked arms with her in demanding justice for murdered Palawan environmentalist Dr. Gerry Ortega,” the group said.

Kalikasan PNE added that they were joined by Lopez in fighting with the people of Batangas and were successful stopping the “threat of mining plunder and pollution to the biodiversity-rich Mt. Lobo and its adjacent Verde Island Passage, through a protest-dialogue with government officials and massive mobilizations on the streets against foreign mining company MRL Gold.”

“She added her voice to the broad climate justice movement, and calledfor a moratorium on the construction of dirty coal power plants in the country,” Kalikasan PNE said.

The group said that Lopez’s leadership at the DENR would bolster the campaign against big mining and coal plants.

“We wish Ms. Lopez to be the spark that will stop the reign of corporate mining, coal power, and other vested big business interests in the DENR. Her resolve, experience and stand for the environment will be an important contribution to the incoming Duterte government’s shaping of a regime that will diverge from the anti-people, anti-environment pathway of the past Aquino administration,” Kalikasan PNE added.

“We trust that when she becomes the DENR Secretary, she will use her position to encourage her family which promotes renewable energy sources such as geothermal and solar power, to be an example to other industrialists by ensuring the protection of our forests and other important ecosystems, and respecting the rights and decision-making of grassroots communities, such as in the case of the Lopezes’ geothermal projects in the provinces of Negros Oriental, Sorsogon and Albay,” Kalikasan PNE remarked.

Duterte offered the position to Lopez on Monday but she has yet to respond to his in invitation to become part of his administration.

“Kalikasan PNE urges Ms. Lopez to accept the vital post of DENR Secretary, and lead it with the same brand of maverick politics that the Duterte administration is known for,” the group said.  SFM