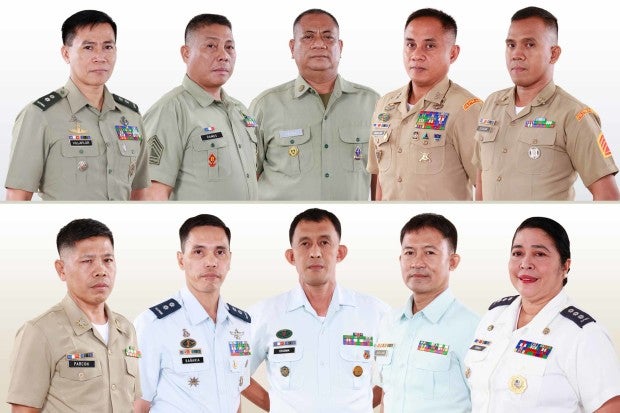 The winners of the 2016 Search for The Outstanding Philippine Soldiers (TOPS). PHOTO FROM METROBANK

An Army colonel at the forefront of combat and civil military operations in Basilan and a Navy intelligence personnel who helped the military to foil several threats are some of the winners of Metrobank Foundation—Rotary Club Makati Metro Search for The Outstanding Philippine Soldiers (TOPS) 2016.

Ten commissioned and non-commissioned officers of the Armed Forces of the Philippines were named as this year’s winners at a press conference on Monday.

Lt. Col. Eliglen Villaflor, who was commanding officer of the Army’s 4th Special Forces Battalion during his nomination, led combat and community service efforts during his two-year stint in war-torn Basilan.

He led operations against the Abu Sayyaf and other lawless elements but also worked with Basilan communities  benefiting thousands because of his initiatives.

“Though I might be very proud of my combat accomplishment, I am more proud of community service na ginawa ko. Kasi yung combat experience, the situation presents itself. Minsan, naghahanap ka ng laban pero walang nangyayari but community development can be done deliberately. Pwede gawin through stakeholders’ engagement which I have done when I was in Basilan,” he told reporters.

(Though I might be very proud of my combat accomplishment, I am more proud of community service that I did. In the combat experience, the situation presents itself. Sometimes, you’re looking for a fight but nothing’s happening; however, community development can be done deliberately. It can be done through stakeholders’ engagement which I have done when I was in Basilan.)

Some of his successful campaigns include transforming a Moro National Liberation Front camp into a school and the conceptualization of Brigada Masjid, which aimed at the beautification of mosques as well as peacekeeping and security of the mosques by non-Muslim entities in preparation for and celebration of Ramadan.

He also developed the Military Free Fall Course, which was later adopted as a regular specialized training for members of the Special Operations Forces. As a United Nations peacekeeper, he successfully negotiated the release of civilians abducted by Syrian rebels in Golan Heights.

Navy Petty Officer-in-Charge Fernando Junio Parcon helped the military to foil several threats. One of his biggest accomplishments was preventing an anomalous delivery of substandard spare parts that would have cost the Navy one hundred million pesos in 2007.

He was also involved in the 2014 arrest of fugitive retired Maj. Gen. Jovito Palparan and the rescue of 71 human trafficking victims in Malate, Manila.

He continues to foil incidents of ghost deliveries and overpricing despite potential risks to his life.

“The search for TOPS is the civilian society’s expression of genuine appreciation and gratitude for the men and women in the Armed Forces — for their sacrifices and dedication in pursuing our shared dreams of a safe and peaceful nation… . They are considered as our modern-day heroes who showed not only unremarkable courage and nationalism, but concern for other people and their communities as well,” said Metrobank Foundation president Aniceto Sobrepena.

The awardees will be presented as Metrobank Foundation Outstanding Filipinos together with winners of the Search for Outstanding and Country’s Outstanding Police Officers in Service on Sept. 5 as part of Metrobank’s anniversary. Each awardee will receive a cash prize of P500,000 and a trophy. JE/rga