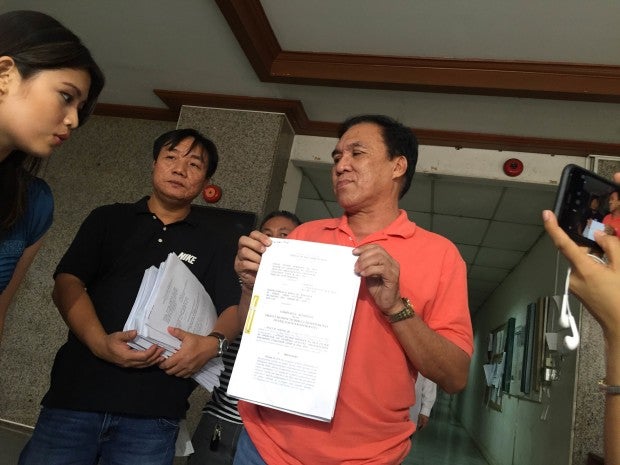 (Updated) A public transportation group on Monday filed a graft complaint against outgoing Transportation Secretary Jun Abaya and Land Transportation Franchising and Regulatory Board (LTFRB) chief Winston Ginez for allowing the operation of Uber and Grabcar allegedly without a franchise.

Jun Magno of the Angat Tsuper Samahan ng mga Tsuper at Operator ng Pilipinas Genuine Organization Transport Coalition (Stop & Go) filed the complaint against the two for allowing the operation of transportation network vehicle service (TNVS), such as Uber, Grabcar and U-Hop, without securing a franchise as required by law.

Magno said Abaya and Ginez approved a Department of Transportation and Communications (DOTC) order in 2015 which allows for “innovation across all forms of public land transport” to increase mobility, improve public transport and “respond to the needs of the modern commuter.”

The department order allowed for the operation of TNVS even without securing a certificate of public convenience, Magno said.

Magno said the officials committed graft for giving undue advantage to Uber, Grabcar and U-Hop to the disadvantage of taxi operators and public utility vehicle drivers who lose income and passengers because of the influx of TNVS.

He added that the influx of vehicles operating as TNVS worsened traffic in the metropolis.

“Even before the issuance of the respondents of the said department order and memorandum circulars, it already deeply affected the rights of the complainants’ officers and members being concerned citizens, taxpayers, operators and drivers of public utility vehicles. Many taxi drivers transferred to TNVS as they could allegedly have relatively good income, passengers of taxis and AUV express decreased tremendously as commuting public tried the use of TNVS resulting to loss of income of operators and drivers of these taxis and AUV express,” the complaint read.

The complainant said only accreditations were issued to TNVS for provisional authority to ply the routes of the metro.

He said these service vehicles were not yet issued a franchise, which is given only after going through a series of hearings and submitting requirements.

Abaya and Ginez also allegedly committed graft when they caused undue injury to government by allowing TNVS to pay a measly amount of P520 application fee to operate, compared to a much heftier cost for taxi operators to obtain a franchise.

Magno added that the officials allowed the TNVS to operate even without the guidelines from Congress as required for under the department order.

“No guidance was issued by the legislative branch of government… The transportation network companies (TNC) were only accredited but not to operate. Therefore, the operations of the TNVS including the TNCs are illegal,” the complaint read.

In a statement, Ginez said Magno resorted to forum shopping after the Quezon city Regional Trial Court junked his plea for an injunction against the implementation of the department order allowing operations for Uber and Grabcar.

He said Magno’s complaint has no basis and that the department order allowing for Uber and Grabcar to operate is consistent with existing laws.

“The filing of a complaint against me and Secretary Abaya for allegedly allowing the operation of Transportation Network Vehicle Service (TNVS), such as Uber and Grab, is a desperate move by Mr. Magno of Stop & Go. After failing to convince the Regional Trial Court of Quezon City in granting his prayer for injunction against DOTC and LTFRB in implementing the Department Order and Memorandum Circulars creating TNVS as a new mode of public transportation, Mr. Magno is resorting to pernicious act of forum shopping to dissuade us from providing our commuting public with safe, reliable, convenient and comfortable transportation that is sanctioned by our existing transportation laws,” Ginez said.

“We are confident that just like the RTC of Quezon City, the Ombudsman will reject the baseless and unfounded allegations of Mr. Magno,” he added. JE/rga