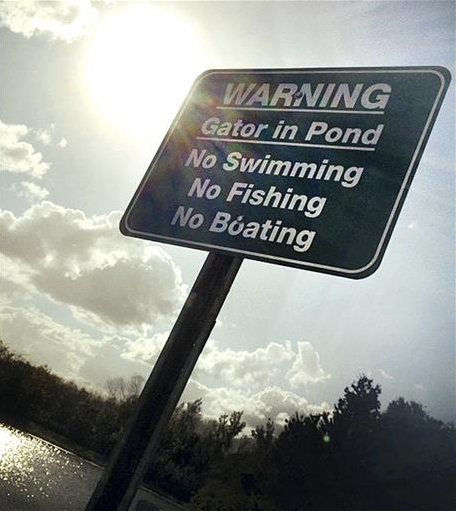 Disney World officials in Orlando, Florida, had finally put up a protective fence along the lagoon where an alligator abducted and drowned a 2-year-old boy as he was playing in the water.

The gator-infested Seven Seas Lagoon shoreline was finally barricaded with a temporary barrier of wooden posts connected by heavy rope over the weekend, as per reports from The New York Post.

Apart from the much needed construction, workers also scattered signs that read: “Danger. Alligators and snakes in area. Stay away from the water. Do not feed the wildlife.”

The Orlando-area resort had known for decades about the alligator issue and was even sued in the 1980s about the lack of warnings after another child was attacked, the report said.

Despite the apparent danger,  only “no swimming” signs were placed at the lagoon.

Meanwhile, more than a dozen workers from a Disney contractor, Buena Vista Construction Co., gathered out on the beach to dig holes and put up the fence and new signs along the 172-acre, man-made lake.

Vice president of Walt Disney World Resort, Jacquee Wahler, led the renovation and vowed to take further precautions to prevent such an attack.

“We are installing signage and temporary barriers at our resort beach locations and are working on permanent, long-term solutions at our beaches,” she said in a statement.

“We continue to evaluate processes and procedures for our entire property, and, as part of this, we are reinforcing training with our [staff] for reporting sightings and interactions with wildlife and are expanding our communication to guests on this topic,” the Disney executive added.

2-year-old Lane Graves playing on the shore outside the luxe Grand Floridian Resort & Spa when the alligator got its jaws around him in shallow water and dragged him under. His body was recovered last week and an autopsy confirmed that the toddler died from drowning and traumatic injuries.

“Disney takes time to do anything, but they did this right away,” an unidentified Disney employee said in the report. “They’re doing this at all the [Disney] beaches today.”

Five alligators have reportedly been removed and euthanized along the area, but it was unclear if any of them were the boy’s killer. Khristian Ibarrola